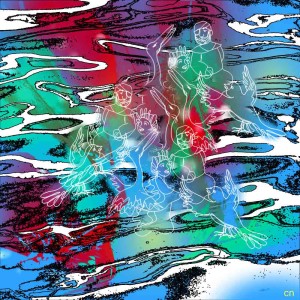 Dowse Lagoon isn’t far from the road, but standing at the viewing platform, you feel nestled in nature. You’re surrounded by the sweet and musty scent of native trees, and an orchestra of bird cries. You take a moment to read the information signs about the local fauna. Perhaps Magdalena is right about the importance of protecting the natural world.

Magdalena picks up the green crystal she wears around her neck, which is glowing brighter than ever. She closes her eyes and begins to murmur a deep throaty song. With her other hand, she reaches out to you, and you reluctantly accept. Her skin is ice-cold.

You watch as the world around you begins to ripple in strange ways. The trees almost look like they’re dancing and soft waves form on the surface of the lagoon. The birds begin to sing in harmony, instead of the disjointed cacophony you heard before. From the pipe behind you, near the walkway, you hear a deep gurgle, and you see a tide of seawater flooding through. Riding the waves are misty spirits you can’t make out at first, but as they rise up, you see they look like ghostly sailors…the sailors of the Bramble Spirit.

The sailors squeeze through the slats of the viewing platform, and form a line out on the lagoon. Opposite them, separated by the low wooden wall, is a line of birds, turtles, translucent swamp spirits, and the bunpin. You’re worried they’re about to fight. But then the sailors bow to their opponents, and the creatures bow back, and they move together. You watch as the unlikely collection of creatures and spirits begin a strange and beautiful dance that blurs the world around them.

Of all the unbelievable things you’ve seen in your life—ghost battles, a poltergeist tantrum, an undead masquerade ball—this is one of the most splendid. You feel a promise being made, a pact between the creatures of Sandgate and the ghosts of the Bramble Spirit. A pact to protect the natural world and honour the environment.

Once the dance has finished, one of the ghostly sailors—the captain by the looks of it—comes to join you on the viewing platform.

‘Many thanks for heeding our warning and vowing to protect this beautiful village and its waters,’ the captain says, extending a hand.

You try to shake the captain’s hand, but your fingers move right through his. You’re used to this. It’s the gesture that counts.

‘You’re welcome,’ you reply. ‘Does this mean you’ll be moving on?’

The captain nods. ‘Aye. Now it’s onto Redcliffe! Those folks need some scaring too.’