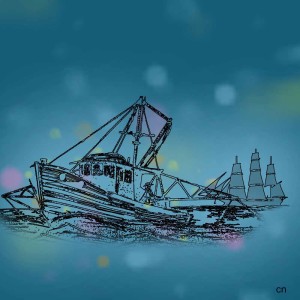 The pictures lining the boardwalk of the Woolworths building are a lovely depiction of Sandgate’s charms and history. You’re particularly interested in the picture of the old fishing trawler bobbing in the ocean, with the two faceless men on deck. Examining Sandgate’s marine history might take you a step closer to the Bramble Spirit.

You approach the picture and reach out a hand to touch the hard surface. This close up, it almost looks as if the birds in the sky are flapping their wings and the waves are lurching. But wait. It’s not just your imagination…

You’re so startled that you trip forward. The next thing you know, you feel your nose hit wet wood. When you pick yourself up and look around, you’re astounded to find that you’ve fallen into the picture. You’re standing on the deck of the trawler as it rocks about in the waves, and the fisherman gape at you as if they’ve seen a ghost.

‘We must have a stowaway,’ one of them says.

‘We don’t have time for this,’ says the other. ‘That storm’s going to hit us in a matter of moments.’

The sky above is grey and furious, and the tumultuous waves are flinging the trawler to and fro. The birds in the sky are screeching and heading back to shore to avoid the fray.

Suddenly, in the distance, the grand figure of a ship appears from the growing darkness. As the ship nears, you’re not surprised to see the words Bramble Spirit etched into its side. Only this version of the Bramble Spirit is solid and unruffled. You must have fallen back into time, before the ship’s demise.

‘We need to ask them for help,’ the fisherman says.

But the three of you realise the problem at once. If the Bramble Spirit stops to help you, it likely won’t outsail the storm either.

You now know the reason for the Bramble Spirit’s downfall. But with your knowledge, you can change the course of history. The Bramble Spirit won’t have to stop to rescue the fisherman if you can rescue them instead.

‘Gentlemen,’ you say. ‘I know it might be hard to trust a stowaway who’s appeared out of nowhere. But I can save more than just your lives if you listen to me.’

A great flash of lightning cracks the sky, and a giant wave rolls over the deck, knocking one of the men to his knees.

‘Anything,’ he croaks through a mouthful of saltwater.

In the air above you, just beyond the trawler, you can see a patch of disturbance—a small round window that’s almost shivering slightly. Your hunch is risky, but the waves are growing taller by the minute. You climb onto the trawler’s side and bend your knees. Then you take a leap into nothing.

You shut your eyes, half expecting to feel your feet hit cold water. But instead, they hit the hard wood of the Woolworth’s boardwalk. You’ve made it back.

The two fisherman come tumbling out of the picture behind you, soaking wet and smelling of fish. A woman pushing a trolley in the carpark faints at your appearance.

But for the first time since you arrived, you can see blue skies in Sandgate and a bright hot sun. You might have some explaining to do to the fishermen, but you’ve changed the Bramble Spirit’s fate and saved the village.