Did you accidentally trigger the wrong location? Never fear, if you’ve decided to consult the books at the Sandgate library, continue to follow the map to KS2 to continue your chosen adventure. 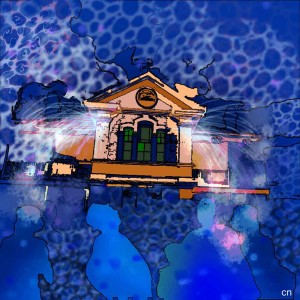 The old Post Office has changed over the years, but you still get a chill when you contemplate its façade. That round window on top sits like an eye looking over the village. You’ve seen things in that window before. Faces too pale for this world. But today, the window is empty. The weathervane a top the Post Office roof is acting erratically. It’s moving to and fro with winds that aren’t actually there.

You approach the small crowd that’s gathered on the pavement, and you ask the nearest person, Miss Lou from the hairdresser, what’s happening. You’ve noticed that the rumbling has grown stronger here, and you’re struggling to keep your balance.

‘We were inside having a chat,’ Miss Lou tells you. ‘When this rumbling started and the walls began to leak.’

‘The walls began to leak?’

Miss Lou nods wildly. ‘Almost as if they were crying. Little cracks appeared, and the manager told us to get out, before…’

Before two powerful jets of water explode from the Post Office roof. The fountains stream high into the air, and soon water is gushing from the circular window too, cascading over the balconies and onto the ground. The Post Office is flooding all over like a suburban waterfall.

You pull Miss Lou out of the way as the pavement around you pools with water.

‘These are my best shoes!’ she exclaims.

‘Wet shoes are the least of our worries,’ someone comments. You look over and see Magdalena Moon standing calmly in the water, her long purple skirts sopping wet.

You’re not sure if you’re glad to see Magdalena. The strange woman claims to be like you—she also deals with supernatural forces. But while you’re concerned with spirits of the dead, Magdalena trades with spirits of the elemental world. Fairies, sprites, dryads, goblins… You’ve never quite bought into it. You know ghosts are real. But fairies are just silly little characters from storybooks. Normally, Magdalena only gets in your way.

‘Burst pipes,’ you say to Magdalena, nodding at the flooded building. You’re keen to show her you know what’s going on. ‘The angry ghosts of that Bramble Spirit must have hijacked the waterways here. It’s time we sort that ship out.’

You notice that the water from the Post Office is moving in a very deliberate direction—flowing across the street, and over towards the shops on Brighton Road.

‘Yes,’ Magdalena agrees. ‘You’d be wise to pay attention to the water.’

But pipes aren’t the only vessels in Sandgate that hold water. If the curse of the Bramble Spirit is traveling through waterways, you can’t ignore Sandgate’s key water features—its lagoons.

The Fish Fountain: Do you follow the rapidly moving trail of water from the Post Office to outside the Town Hall bakery?