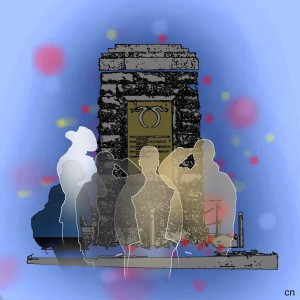 There’s a group of translucent men huddled around the monument in the centre of Memorial Park. You can see right through them to the grey stone of the marker behind. They’re dressed in their uniforms and are passing around a tin coffee cup, even though you know ghosts can’t consume food or drink anymore. Old habits die hard.

The two dark green lamps by the monument flicker on and off with the ghosts’ energies. As you approach, you notice the men frown and the lamps shine bright and strong for a moment, before shutting off completely. As the light disappears, so do the ghosts.

‘Don’t be offended,’ says a voice behind you. ‘They just don’t want to talk to you about that ship.’

Old Jimmy, the village oddball, is sitting on a nearby bench. He seems to always linger around places where strange things happen. He’s older than the seas, it’s no wonder he seems so intimate with the afterlife.

‘The Bramble Spirit?’ you ask.

‘That’s the one. My mates here won’t jump to help you. They think the ship deserves its curse. All thanks to that greedy Hunter.’

‘What did Captain Hunter do to deserve such a terrible fate?’

Old Jimmy moves closer to you, wide-eyed, jowls trembling. ‘Captain William Hunter was a thief. His ship was ruined as payback for the treasure he stole. Treasure he stole from his mates.’

You give Old Jimmy his moment, as he places his hand on his heart and bows his head.

So that’s why Captain Hunter’s ship was doomed. Stolen treasure. You wonder why the Bramble Spirit has appeared now, a hundred years later. Perhaps Captain Hunter has come to make amends. Or perhaps he’s come back for the treasure. Did he hide it in Sandgate somewhere?

You’re going to have to head closer to the ocean to figure out your next move here. Head to the Leaning Tree on the Foreshore at the end of Fourth Avenue to start your search for Captain Hunter’s treasure.