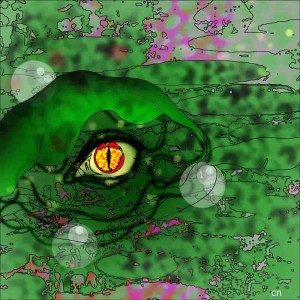 Compared to the madness of the flooded Post Office, Einbunpin Lagoon is a serene picture. You stand in the rotunda, admiring the calm water—the reflections on its surface, the ducks that paddle along, and the nest of secretive trees on the other side. When a hand taps your shoulder, you jump.

It’s Magdalena Moon. She’s followed you from the Post Office. She’s wearing a great green crystal around her neck and it’s glowing brightly.

‘You were right to come to the lagoons,’ Magdalena tells you. ‘The swamp spirits, vile as they might seem to some people, are the ones we need to help lift this water curse. For the curse is a warning.’

‘A warning?’ Magdalena had lost you at ‘swamp spirits’.

‘A warning that we’re ruining our oceans,’ Magdalena continues, passionate. ‘Have you seen the Bramble Spirit yet? No one has dared to look closely at that ship. I observed it with my telescope yesterday. The ship is caked in pollution. Its masts aren’t shredded—they’re covered in plastic bags! And that’s not blood on its deck. It’s oil and grime and waste. The Bramble Spirit has come to warn us to start looking after our seas or else. If we’re going to let it know we’ll heed its warning, we need the lagoon spirits on our side. They’re the most powerful of nature’s spirits.’

Typical Magdalena. Always raving about nature and the earth’s energies. You’re ready to pat her on the shoulder and continue along, but something’s happening on the surface of the lagoon, near the bird statues. Great bubbles rise from the water, and the ducks swim away. You watch as a vast watery figure rises, towering over the statues.

You don’t like the word ‘monster’, but the creature that stands before you is like nothing you’ve ever seen. Part human, part bear, part fish, you’re fascinated by every inch of it. It smells of algae and smoke, and emits an oozing sound, like paint slopping out of a tube.

Beside you, Magdalena cackles with delight. ‘It’s the bunpin,’ she tells you. ‘The spirit of the lagoon.’

You have heard of bunyips. Interesting creatures with a bad reputation, they lurk around billabongs, swamps and lagoons—guardians of the waterholes. You’d always thought they were a myth.

‘The bunpin is a special kind of creature, a cousin of the bunyip,’ Magdalena tells you. ‘Native to the Einbunpin Lagoon. It’s fiercely protective of Sandgate.’

The creature points a dripping claw at you, beckoning. It lets out a squelching cry.

‘What’s it saying?’ you ask Magdalena.

‘It can’t help send the Bramble Spirit off without the help of its friends at Dowse Lagoon,’ Magdalena says. ‘We must go there and call the forces.’

You’re certainly intrigued by the formidable creature in front of you. But you’re not sure if you’re ready to trust it and Magdalena’s ramblings about the environment. The tricky cases you’ve solved in the past have been cracked by keen observation and investigation, not the word of a swamp monster and a fairy hunter.

Dowse Lagoon: Decide to trust Magdalena and the bunpin this time, and follow their lead to Dowse Lagoon? Head to the lagoon viewing platform just past the Scout Hall.

Woolworths Art Display: Stick with your investigative instinct, and keep looking for clues to lift the Bramble Spirit curse elsewhere? You’ve noticed a series of artworks over by the Woolworths building on your walk here that depict images relevant to the ship’s story.