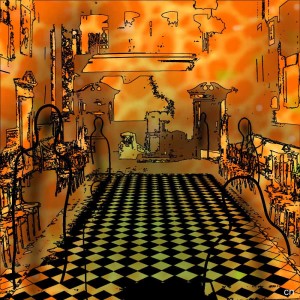 The old hall, despite its façade, hasn’t been used as a functioning Masonic Lodge for some time. At least not to the public. There are a special few who can access the secret room underneath the old hall, still used for meetings of a clandestine and supernatural nature.

You stand on the other side of the road, facing the Hall, near the bike racks. You align yourself so you’re directly opposite the compass painted on the ground outside the Hall, then you knock the special code on the bike racks behind you. It’s a numerical code – 1-8-8-9 – each series of numbered taps followed by a brief pause.  This is the signal to the occupants of the room underground that one of their allies has come to talk.

Soon, you see a man in a heavy coat appear on the balcony. He nods at you twice, and then moves back inside. You know the secret door around the side, by the driveway, is now open. You enter through it and head down the winding staircase to the underground hall.

The hall is dim and cave-like. The floor has a chessboard pattern, and there is a long table set up lined with high-backed chairs. Bookshelves cover the walls, full of dusty tomes and curious artefacts.

The Masons know why you’re there.

‘Yes, we can help you reunite the lost lovers and send off the ghost ship,’ the man from the balcony says to you. His name is John. They all seem to be called John… or Thomas. ‘We have an ancient implement, useful for binding lost spirits together.’

This is what you’ve hoped for.

‘We will let you borrow the implement,’ John continues. ‘If you answer one of our oldest riddles.’

John clears his throat. ‘Where was King Solomon’s temple located?’ he asks.

You think hard for a moment. Then the answer becomes clear.

One: If you value humour over reason, click here.

Two: If you value reason over humour, click here.