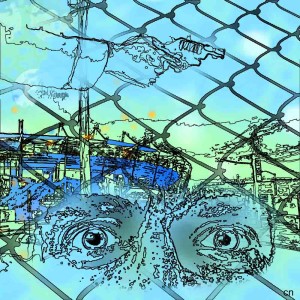 A majestic staircase ascends in front of Gate Ten, stretching wide and tall. Inscribed above is a verse of poetry, partially obscured by the massive concrete overhang of the corporate boxes. You can only decipher part of a single line:

A cold shiver runs through you. Whatever the gangster is involved in, you hope there’s nothing lethally inspired about it.

“There she is.” You point out Alice standing at the mouth of the dim alley under the giant staircase. She’s rattling the handle of a recessed doorway, trying to gain entry to the complex labyrinth of concrete corridors that feed into and out of the belly of the stadium.

Street calls, “ Do you need help?”

Alice freezes, then bolts down the alley. She expertly monkeys up a six-foot chain link fence and hurtles the bag over. It lands with a clang on the tiled floor beyond. In the time it takes to blink, she flips her small frame over the top of the fence, landing feather-light on the other side. She grabs the bag, doffs her cap, and pelts off around the corner and out of sight.

As you wonder what on earth she is up to, a large hand grips your arm, twisting it up behind your back. “Ow, hands off!” You turn your head to find the gangster on your heels. He lets go, pointing a snub-nosed gun at you and Street. The gun looks like a toy in his meaty hand, but the expression on Street’s face tells you it’s all too real.

“What the hell do you want with my daughter?”

“Bagman?” The gangster raises his gun, his face reddening with fury.

“Bag woman. Bag girl? Whatever you call her.”

“Alice. We call her Alice!” The anguish in the gangster’s voice gives you pause.

“Street,” you say quietly, “I think he’s telling the truth.”

The man lowers his gun. “She grabbed a bag off a fellow over on Logan Road, and took off here for the stadium. She’s always been a wild one—there’s no stopping her once she’s set her sights on something. Do you know what she’s up to?”

“No, but we’re assisting the police, and she’s a suspect in a theft.” Street still sounds suspicious. “Alice is really your daughter?”

Before he can answer, a deafening roar erupts from the stadium, spilling down the stairs and flowing over you like a tide. Maroon and gold figures cascade down the stairs towards you—fans and officials all crowding around a cluster of game jerseys. Well-muscled giants, glowing with pride, hold aloft a giant gold cup. The crowd reaches you, jostling past, and you catch sight of a familiar figure. Atop the shoulders of the tallest player sits Alice, a watermelon grin visible below her cap. The amorphous cheering takes shape: Alice, Alice, Alice!

You grab the arm of an official. “What’s going on?”

“Some villains nicked the cup, along with the prize money, in a heist earlier today. But this kid singlehandedly nabbed it back.” She points up at Alice. “She’s a hero!”

“But—” your mind races with this new information. “Why aren’t the police here?”

“Apparently the local sergeant was in on the heist.”

“Adler!” Street swears under his breath. “Uncle Bob was right about him all along.”

Alice spies her father. “Dad, Dad! Look at me!” She sees you and Street by his side, reaches up, and tosses you her cap. “Thanks for the help!”

“Cheeky bugger!” Catching the cap, you wiggle it onto your head, the band far too tight. You give her a bow, and laugh.