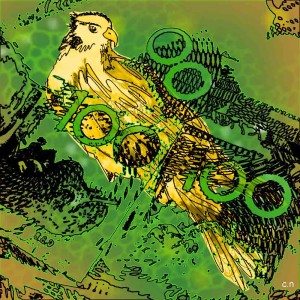 At the corner of Logan Road and Nile Street, Street leads you and Alice carefully across Logan Road to a funky, single-story building. With its triangle shape and indoor/outdoor layout, it’s a little slice of Paris right here in Woolloongabba.

You all step into a cosy nook at the front of the café. You are effectively hidden from the street, but have a panoramic view of the neighbourhood.

Alice drops the leather tote bag at Street’s feet. It lands with a loud clang on the worn wooden floorboards. “I saw you with that police radio and thought you’d flipped.”

“No chance of that.” Street check the streetscape again, obviously edgy. He points to you. “But I had to bring along a new recruit, who got a good look at you straight after the heist.”

You look back and forth between them in confusion. “What’s going on?”

From every direction, figures approach. Up Nile Street, a man walk quickly towards you. He is dressed in black clothes from top to bottom, even his running shoes. Down Logan Road, an older couple approach more slowly but with just as much determination.

The police radio squawks. Street grabs it off you. “Street, it’s Adler. What’s the update?”

“The Diamond Adonis has been robbed. Witnesses accused a kid in the sports cap. I’m chasing on foot. Go carefully there, Street. If Adonis is involved, it’s probably a well-organised heist.”

“Looks like it.” Street exchanges a smile with Alice, and flicks his gaze to the bag. She gets the hint, and bends to open it.

“What did they get away with?”

Alice pulls the bag wide open so you can peer inside. Dozens of rolls of money, held by rubber bands and packed in tight. Nestled  amongst all that dough, you spy a sparkling rainbow-hued figurine. “The weekly takings—and given the Diamond’s back alley business, that could be millions. And something about a bird.”

“Yeah, an opal something or other.”

“Not the Opal Firebird?” Dead air crackles for a moment. “It’s been missing for a decade—stolen from a private museum.”

“I wonder if Acer will dare to make a formal report. He’s got his fingers in too many dodgy pies to risk showing his face in the station.”

The two men in black enter the café, followed closely by the older couple. With start, you recognise Zoltan and Olive—she in a Fedora, he with fright-wig hair and a violin case in hand.

Street bends down to retrieve the scintillating sculpture, and holds it out to Zoltan. Behind his glasses, the old man’s eyes brim with tears. With shaking hands, he reaches for the priceless treasure. “My mother’s legacy, home at last.”

A black SUV pulls up outside the building with a discreet screech. Another man in black steps out of the driver’s seat and leans on the bonnet, taking in the sight of Street and his mismatched team. Street checks his watch, then signals to get in the car. “Adler, I’ve sighted the thief. They’re jumping into a little red hatchback, up near the stadium. Rego CUL8RR. I’m off in pursuit.”

“Thanks, Street. You’re one in a million.”

Street smiles, switches the radio off, and dumps it on the footpath. He turns to you. “You’ve shown courage and cunning, newbie. We’ve been looking for an extra for our little gang. The job’s yours—if you still want.”