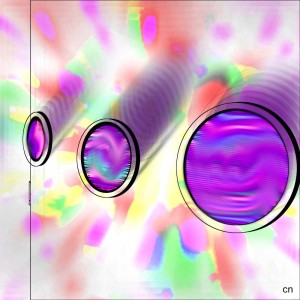 The thief’s maroon and gold cap bobs along, making slow progress through the crowd. Your heart is pattering in your chest as you jostle after it.

On game days, the stretch of lawn on your right is packed with marquees and fan activity, with the comforting smell of sausage sizzles weaving through circus colours and joyous cheers. The thief disappears into a huge pipe at the stadium perimeter: one of many, ringing the stadium like mysterious caves—dark and foreboding. You want to dive in after the thief, but Street puts a restraining hand on your shoulder.

“My Uncle Bob was stationed over there when I was a kid.” He points towards the Old Police Station. Its weathered, buttery weatherboards walls nestle next to massive concrete stadium. “Right before he disappeared, Uncle Bob took me for a tour through this building. Around the back is a series of holding cells, and a labyrinth of interconnecting passageways—the perfect hiding place for a thief on the run.”

Together, you rush past the front of the Old Police Station to find the rickety wooden staircase still there. You tread down into a sunken courtyard. It’s deathly still down here, compared to the noisy bustle at street level. In front of you are two ghostly figures; silver, hollow, arms raised as if in surrender. Fear runs its knuckles up your spine, they could be chalk outlines come to life.

Adler calls on the police radio. “Street, the thief is not acting alone.  A tech must be in on the heist: we’re getting reports of mobile phones being hacked andeven our radios.”

Suspicion clouds Street’s eyes. “That’s a little fishy. Uncle Bob once accused Adler of being a corrupt cop, back when he was working in Intelligence; tech scams were a specialty of Adler’s Unit. That was just before Bob disappeared without a trace…” Street’s jaw set. It was the turning point that set me on my path to become a P.I..”

Your heart fills with empathy for this gruff, complex man—like you, driven to leave no mystery unsolved.

Suddenly, a crouching figure explodes into life out of the dim, narrow alleyway to your right, belting past you towards Vulture Street.

A whistle peals through the courtyard, and you clutch your ears. The Police radio! The screen is just kaleidoscopic squares of colour. “Street, we’ve been hacked!”

Street looks grim.  “I have a feeling Adler is up to his old tricks, sending us on a wild goose chase to put us off the trail. His Hacker team must have a booster signal somewhere near here. What do we do now?”

Corner of Ipswich Rd & Vulture Street: Demonstrate your tech savvy and find the booster signal? Cross at the lights over Main Road towards the “Government Land Centre”, and stop on Main Street 10 metres from the corner of Vulture Street. You suspect there will be more to these grim grey buildings than first meets the eye.

Gate 7 The ‘Gabba: Flaunt your tenacity and keep tailing the thief? Turn right into Vulture Street, towards the stadium—it has a million places to hide, but you’re confident you can help Street find the thief there. Stop outside Gate 7 on Stanley Street, the last gate before the Wellington Street intersection.

Being a PI takes guts and creativity. Show your creative side by posing with the silver silhouettes: will you run from them in fear, chase them heroically, or cross into another dimension by stepping through them? Let your imagination go wild!  Take a photo of yourself in action, and upload the evidence to Facebook/Twitter using #StoryCity