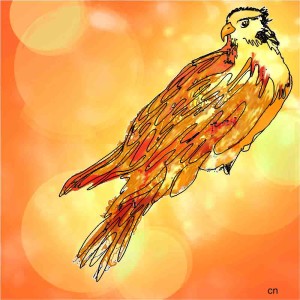 A dozen witnesses mill around the pedestrian seating area across from the old clock at the western end of the ‘Gabba precinct mall. The air buzzes with tension.  Your brain works overtime, trying to observe and catalogue details.

You recognise a famous restaurateur in her fedora and pearls, talking heatedly with a violin-maker, his Einstein ‘fro shocked to greater-than-usual heights. Both locals, both revered in their game.

Street approaches the pair. “I’m P.I. Street, and this is my assistant-in-training.”

Zoltan peers at you over his half-moon specs. ” I remember you, Street. Still up to no good?”

“Come on, Mr Palenko, I never got into any real mischief.”

“What about the time you hid your pet mouse in his violin case?” Olive Perlie pushes up the brim of her fedora. Her eyes twinkle fondly. “They heard you scream all the way in Budapest, I think, Zoltan.”

Hearing this description of Street’s wayward youth gives you new insight. This makes you feel better about your own chances of success. You kick off the witness interrogation. “Did either of you see what happened?”

Immediately, a chorus of witnesses fire their opinions at you and Street. “Unbelievable! … An outrage!”

“We saw a young fella run off that way!”

“Okay. Who was robbed? What did they take?” Street asks.

The crowd stalls, only a few shuffling feet breaking the silence.

“It was me.” A tall figure in a long, dark coat steps forward. Street raises his eyebrows at you, and you nod, letting him know you recognise that face, from news reports. Known as Acer, he runs the Diamond Adonis; a high-end antiques shop, rumoured to run more deals under the table than across the counter.

“They took everything from my safe, but most importantly they took a relic. An opal Firebird; the legendary creature of magical protection.” Acer holds his hands apart to indicate the size of the treasure is akin to a football. “It’s carved from a block of solid black opal worth three million dollars. The thief must be caught!”

You catch your breath. Three million dollars? Money like that would change your life more than any new job.

“The thief locked me in my own safe room—I’ve only just escaped! But through the window, I saw them run off that way.” He points along Jurgens Street, up past the massive Jacaranda tower looming over the precinct. “I think it was just a kid—but, be careful. They had a gun.”

“Stay behind me—you’ll be fine.” Street looks calm and confident.

You put a tight lid on your fear, and try to think the situation through logically. “The thief is young—maybe they’re working with an accomplice.”

Street eyeballs you, then nods in approval. “Great insight into the criminal mind, newbie. What do you suggest we do next?”

Giant Surfer: Follow temptation and hunt down the thief to get that three-million-dollar treasure for yourself? Walk south along Jurgens Street, then turn right onto Balaclava Street and walk one block to Ipswich Road. Turn right onto Ipswich Road, then cross at the lights to stand at the corner of Hawthorne Street.

The Broadway Building: Demonstrate your cunning and tail the thief—if they lead you to the accomplice, you could catch the whole gang, and be a hero!  Walk south along Jurgens Street, then turn left at Balaclava Street and walk one block to the corner of Logan Road.

Examine the ‘Gabba Precinct skyline carefully for the bird sculpture perched precariously atop a high façade. Could this be a clue to the whereabouts of the Opal Firebird?

Once you find the silhouette, take a photo of yourself in front of the skyline, and upload the evidence – including your guess at the clue – to Facebook/Twitter using #StoryCity

There is a guerilla artist who climbs buildings all around Brisbane, leaving a cut-out artwork figure as his calling card. This year, he is having a particularly Good Year.