Did you accidentally trigger the wrong location? Never fear, if you’ve decided to tail the thief, continue to follow the map to MV5 to continue your chosen adventure. 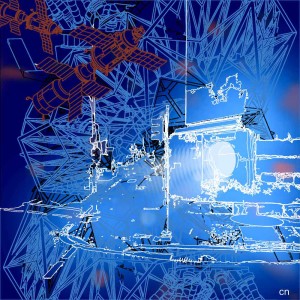 On Ipswich Road near the corner of Vulture Street, Street draws your attention to the infamous ‘building without windows’ diagonally across the road. “During the Cold War, this building put Brisbane on the map as a nuclear target. The official line is it’s a data comms centre, but it’s actually home to the Australian Interstellar Commission, A.K.A. Spook Central.

There is no sign of the thief, but something else catches your eye: a spiraling, glowing circle of white light, bright as starlight, hovers on the corner, under the giant billboard out the front of Spook Central.  “What’s that?”

“A space-time portal.” Street curses under his breath. “And the way it’s glowing means something—or someone—is about to come through.”

“Space-time portal? Are you insane?” You whip around to stare at him. “Just what kind of Investigator are you?”

“Whatever kind the situation calls for.” Street’s tone issues you a challenge. “The real question is, what kind of an Assistant are you?”

A deafening clap of thunder interrupts your answer, and the sky lights up for a second. The thief bursts out of the portal and makes a heart-stopping run through the traffic towards you. The thief leaps down to a sunken utility area beside you. No one would ever notice this place, hidden by giant fig trees and concrete retaining walls, unless like you, they had a special reason to look.

Desperately trying to make sense of it all, you yell out, “Stop, thief!”

“I’m no thief!”  Below you is the thief’s upturned face, and you realise it’s a girl, fifteen at most, slender and nervous. “My name’s Alice. Please, will you help me?”

You gaze into those unsettling, flinty eyes. “What’s in the bag?”

“There’s no time!” She’s shaking. “Keep your eyes peeled, and don’t trust anyone—nothing is what it seems!”

Waves of panic radiate from your chest. But Street is watching you carefully, judging your reaction, so you take a deep breath, and try to act like space-time jumps are something you see every day.

Street smiles. “It took me awhile to get used to this too.” “Now, help me find the booster signal for the hackers. Alien tech – don’t give me that look, yes aliens are as real a time portals – alien tech looks similar to human tech at first—TV antennas, satellite dishes, water tanks—until you begin to question the clever disguise, and ask yourself why it’s actually there.”

You walk around the entire building, scanning for alien tech, and are stunned to catalogue strange disks and cameras clipped high to the building’s walls, and buried deep in the sunken area below. “There!” You point to a strange, miniature satellite dish mounted on the railing nearby.

Alice reaches into her bag and pulls out a sleek chrome weapon, and blasts the dish to smithereens. You flinch as it explodes onto the footpath. You check your radio. It’s working again.

“Now do you believe me?” Alice pleads. “Aliens are coming—we have to fight them. Meet me at the purple tower!”

Another clap of thunder roars down the street. You look up to see Adler burst out of the portal. He calls to you from the front of Spook Central. “Don’t let her get away! She’ll destroy the first contact we ever have with aliens! Work with me, and we’ll make history as the first Alien Ambassadors!”

It’s time to make your final decision. Do you:

The Jacaranda Stack: Throw your lot in with this strange girl to protect the earth from alien invasion? Head south along Ipswich Road, cross over to walk through the ‘Gabba precinct, and continue until you reach the park at the base of the purple tower stack.

The Space-Time Portal: Decide to make friends with our alien neighbours? Take Alice prisoner, and join Adler at the Australian Interstellar Commission. Head north along Ipswich Road, cross the lights across Stanley Street and Ipswich Road until you stand at the portal in front of Spook Central.

Document any evidence you find of alien technology—use your imagination, it’s all around you!—and upload it to Facebook/Twitter using #StoryCity