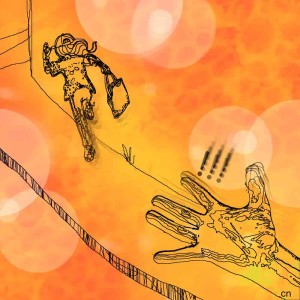 The massive concrete stadium looms above you, blocking the sky. Street leads you past new apartment buildings rubbing elbows with old favourites: the stern Tudor lines of the German Club, the art deco whimsy of the Substation. Throughout the decades, these ‘Gabba streets have cradled the dreams of hundreds of thousands of sports fans, with thousands more joining them today.

“As a kid, I would hang around here on weekends,” Street recalls. “I think I still have my old autograph book, pages yellow but the signatures still clear.” He glances at the ticket booth, where crowds snake in lines on game days. “The names of the heroes may have changed, but my heart still dances at the thrill of the game.”

“Look, there!” You spy the thief just ahead, lurking at the end booth. Your muscles tense, ready to spring into action. Then you notice a figure pushing towards the thief against the tide of warm bodies. Street pulls you behind a pole to spy. Heavy set, with soft jowls and a long scar from his eye to his chin, he has all the hallmarks of a gangster. He drops one meaty hand onto the young shoulder. The thief turns to give a cheeky smile, and you notice that she’s a girl, no more than fifteen. The gangster slides the leather tote out of her grip, and gives her a wink as he turns to leave. But the girl’s not happy, and grabs the sleeve of his suit. He shakes her off, and she stumbles.

A flicker of anxiety crosses her face. Something’s not right.

The girl lets out a warrior cry as she charges at the gangster, grabbing the bag and racing around the corner.

The gangster’s face darkens with rage and contorts with the effort of keeping his voice light, trying not to draw attention. “Alice! Get back here now!”

But Alice is gone. The gangster lumbers after her, but you and Street are quicker.  You nearly catch up with Alice, but she slides under a gap in the fence of the local school, scampering over a giant rainbow snake sculpture hugging the perimeter of the playground. You race around the long way, turning right at the lights onto Wellington Street, and along Wellington Street towards Stanley Street to the main school gate.

From the footpath outside the main school gate you spy a castle turret in the school grounds. Inside, you catch a glimpse of the sports cap. The big school bell rings out from this bell tower, then the cap disappears. A smile of grudging admiration crosses your face: young Alice is leading the gangster on a wild goose chase up the turret.

“That radio—it’s working again!” You pass it to Street.

“Street here. We’re in pursuit of the thief, and another suspicious person.”

“Copy that. This suspicious person—wouldn’t happen to be a big guy wearing a suit?”

“I have my ways, Street.” Adler sounded smug. ” Follow the girl, but stay away from that gangster if you know what’s good for you. Adler out.”

“Hmm, more secrets. There’s a something about Adler I just don’t trust.” Street hands the silent radio back to you. “What now, newbie?”

It’s time to make your final choice. Do you:

Gate 10: Follow the kid? Innocent or guilty, you can’t leave her to face that gangster alone. Turn right onto Stanley Street and walk to the base of the main entrance stairs for the stadium.

Cnr Stanley Street & Wellington Street: Confront the gangster? If Adler is crooked, you might be the only hope of saving the stolen loot. At the traffic lights ahead, cross Stanley Street, then turn right and walk along Stanley Street back towards the Logan Road cul de sac precinct. Stop at the corner of Jurgens Street.

P.I. Street loves sports stars. Document the stars of the ‘Gabba Stadium, home of the Brisbane Lions and the Queensland Bulls, by showing how many stars are in the constellation of the Lion and Taurus combined.

Take a photo of yourself in front of these stars, and upload the evidence to Facebook/Twitter using #StoryCity

Look up to see the stars!