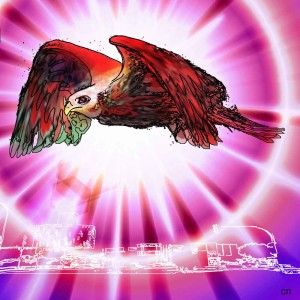 “Public monuments to local creativity are all around us.” With pride, Street points out local landmarks. “Laser Tag was invented right here in Wolloongabba, and now it’s played all over the world. And there’s the giant surfer on the corrugated tin roof wave—a ‘Gabba classic!”

You nod politely, pre-occupied with scanning the area, forming secret plans to ditch the P.I. and steal the treasure.

You catch a glimpse of the thief across the road. They are holding up a strange glowing object, pointing it directly at you. Glimmering with ice and fire, it has outstretched wings that seem to move. The magical firebird!

Something strange begins to happen. Your senses warp as the chaos of modern life seeps away into sepia stillness: the road becomes riven dirt, bullocky carts clip-clop by, grit settles on your skin. You rub your eyes and look again. The thief is still pointing the firebird at you, but they have swapped their sports cap for a bonnet, their jeans for a bustled black frock, richly draped over whalebone curves.

“Street, what’s happening?” Bewildered, you panic, and hold out the police radio to him. “Call for help!”

“What’s wrong, newbie? You look like you’ve seen a ghost!” Street takes the radio and scans the area. “I don’t see our thief.”

Layered beneath the fading image of a modern white building at the corner of Ipswich and Hawthorne, a rough old wooden shack emerges, its rusted tin roof creaking in a stiff breeze.  The thief disappears behind the shack, casting a nervous glance over her shoulder. She catches your eye, her bonnet-shadowed face drawn with such grief that you clutch your chest in sympathy.

You squint through sifting prisms of time to make out a hallucinogenic swirl—a modern mural painted on the side of the shack undulates as time seems to shift. Broad swathes of colour twist and writhe, until the face of a powerful Goddess forms in the sky. The woman in black holds up the firebird, chanting in a strange dialect.

Beside you, Street is muttering into the police radio, calling for paramedics. “I don’t know any medical history—we only just met. But it looks like some kind of fit, or maybe a heart attack. Come quick!”

Street’s form begins to flicker like an old film reel, blurring and dissolving.

The Firebird grows huge. It raises its proud beak and lets loose a shattering cry. The wind squalls with cat-o’-nine-tails lashes. The face of the Goddess merges back into the mural, while the woman in black is lifted off her feet, skirts spinning. The Firebird rises up beneath her, and she settles astride its mighty back, turning the winged beast back towards you, swooping so close you feel the breeze against your neck. The firebird extends its fearsome talons, and swipes deep through Street’s ghostly form.

“Look out!” you cry. Winds howl with wild longing, and the sting of magic is against your skin.

“He does not see what you see, under the firebird’s spell. We mean no harm.” She holds out one hand. “Time is slipping away. Come! I need an Innocent to help complete this.”

“Innocent, me?” You call back, heart racing, but determined to cover your fear.

“I’m Alice. I’ve travelled aeons to find this magical bird. It has chosen you to help complete my quest.”

You reach up as high as you can stretch, and make your final decision.

The Church: Reach up and take Alice’s hand, forsaking your dreams of wealth to solve this mystery? You swing on to the back of the mighty opal bird: continue west 200 metres along Hawthorne Street until you reach the white church at the top of the hill.

The Old Post Office: Grab the bird’s talons and try to pull it to the ground, determined to defeat the sorceress and make this magical treasure your own? Continue 20 metres along Hawthorne Street, then turn right into Hubert Street and walk one block until you reach the corner of Stanley Street.

Can you find the face of the Goddess?

Once you find it, take a photo of yourself in front of it, and upload the evidence to Facebook/Twitter using #StoryCity

It’s painted on a building wall.