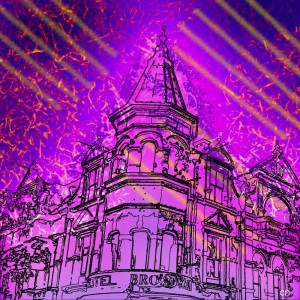 Broken turrets haunt the skyline as you look around the corner of Balaclava Street and Logan Road. You and Street have tailed the thief past a half dozen auto shops. If someone were looking for a getaway vehicle, this would be the perfect place.

You reach the corner where Hotel Broadway presides in all its grand, gothic glory. A shard of glass catches your eye—you follow the shatter pattern until you locate a broken window. Inside, silhouettes move around, low voices murmuring in the shadows.

Street puts a finger to his lips. Crouching beneath the windowsill, you’re careful not to make a sound.

“We can’t wait any longer, Alice,” a gruff voice complains.

“Give it a minute.” The reply is high-pitched, almost singsong.

Street waves you to move onto the balcony, where you plaster yourself against a pillar and peer inside the building. A doorway beckons, on the far side of the window, leading into a narrow corridor parallel to the main entrance where the voices lurk.

You signal Street, then you enter the side door, stepping with caution. From somewhere deep inside the building drifts the sound of soft, repeated sobbing. A cold terror creeps over your skin. You inch further in, closer to the heartrending sound. Along the hallway, high-set crenellated windows give mottled views into a series of rooms off to the left and right. Shadowed figures are at work; the clacking of a keyboard, the murmurs of a phone call.

At the end of the hall, you tread carefully down three steps into a utility area. Dust coats every surface. You turn a corner into the old kitchen, where an open door leads out to a paved courtyard. A young woman sits on a kitchen stool—a girl really, no more than fifteen. She is crying softly, a leather tote at her feet. Between her small hands, she kneads a red and gold sports cap.

She looks up, sees you, and freezes.

“Are you Alice? Is everything okay?”

She nods slowly, her eyes darting around.

Muffled footsteps thud against wooden floorboards in the next room. You place a finger to your lips, and tilt your head to the far exit into the rear courtyard. Then you hold up your fingers, asking a question.

She holds up three fingers in reply. At that moment, Street steps through the courtyard gate, its metal latch softly screeching.

Behind you, the dull thuds become a rumpus, moving closer. Alice picks up the bag. She looks from you to Street, and mouths, “Run.”

As a P.I., Street has a strict credo: he will take on any case, as long as it is “a do-able, worthy” assignment.

Solve the anagram, then take a photo of yourself in front of the solution, and upload the evidence to Facebook/Twitter using #StoryCity

Unscramble the letters in  “A DO-ABLE, WORTHY” to solve the puzzle.