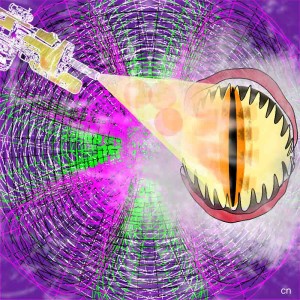 In a bright patch of parkland, the tower looms. Alice passes you and Street each a weapon, chrome and sleek. “It’s starting.”

Tiles lift off the purple tower, one by one, like Jacaranda petals in the breeze. As they spin in mid-air, long silver twists emerge, gracefully billowing down to the grass, then growing solid.

“How do you know so much about them?”

“Wait, you’re with Spook Central?” Your mind races to understand this new allegiance. “Then who’s Adler with?”

“We’re about to find out.” Street raises his weapon.

A twist materializes right in front of you. You stare into its glowing eye: hypnotic, drawing you in. All hope seems to lie within this shining swirl, birthing stars in its infinite depths. A calm drifts over you, slowing your pulse, sandbagging your limbs.

“Watch out!” Alice’s bony elbow in your ribs snaps you awake.

The silver eye has turned into a gaping maw, impossibly huge and close. Deep within are gnashing teeth, rotating as fast as blender blades.

Instinctively, you trigger your weapon. A beam of dark energy, invisible and unstoppable, hits the silver twist right in its spiral maw. The twist scatters, smoke in the wind.

A moment’s sadness passes over you, for the great and terrible beauty contained in that being you so summarily dispatched. “Did I kill it?”

“Nope—you sent it packing back to its own dimension.”

More spectres drifted down to earth, surrounding you, moving closer. You stand back to back with Street and Alice, firing dark energy until the air is thick with writhing twists, ascending and descending in a mad dance for earth’s survival. One by one, you send the aliens home. The Jacaranda tiles rejoin the tower—but one gap remains.

Behind you, Alice swears. “My weapon is jammed!”

Street turns to help, but the last lone twist pushes him to the ground. It lowers its spinning maw over Street. He lets out an anguished scream, suddenly cut short. There is nothing left of Street but a smoldering pile of ashes on the ground.

Its spiral maw is the biggest you’ve seen. A familiar face looms out from the infinite starbright. Every organ in your body turns icy cold as you raise your weapon.

“So long, Adler.” You blast the twist to the four winds. It lets out an almighty howl that will haunt you until your dying day.

But that day is not today.