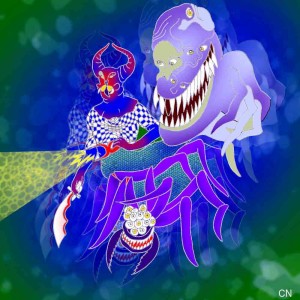 From the portal, ghostly shapes begin to emerge accompanied by deafening yet strangely beautiful sounds, like an alien symphony orchestra. The shapes spin in mid-air and form long silver twists, gracefully billowing down to the concrete, then growing solid to form a hundred-strong phalanx. At the head stands a proud figure.

Street yells out in surprise. “Uncle Bob? You’re an alien!”

The alien’s kaleidoscope face shifts.  “Why do you think you became a P.I., Street? Coincidence, or a suggestion planted deep in your brain stem, directing every choice in your short human existence leading you to help us today?”

“Welcome, High Commissioner.” Adler extends his uniformed arm towards the packed sports stadium. As if in response, a mighty cheer roars out from the crowd. “Street and his Assistant have captured the traitor. All is in readiness for your welcome.”

Street stands in mute confusion. It is up to you to act. “Wait.” You turn to Adler, your tone low and harsh. “You are going to escort a phalanx of aliens into that defenceless crowd?”

Alice takes advantage of Street’s distraction to break free of his grip. With inhuman speed, she grabs the tote bag from Adler, hauling out the chrome weapon. She points it at the High Commissioner.

“Uncle Bob!” Street is shocked into action, throwing his body in front of the Alien High Commissioner. “Alice, no!”

Before your eyes, Alice morphs from girlish form into a terrible beast: huntsman spider legs sprouting from the body of a giant crocodile.

Adler pulls a chrome pistol from his uniform jacket. Amid the chaos, you can’t help but notice it’s far from a standard issue police revolver—in fact it doesn’t even look like human technology.

Adler aims and fires, just clipping the monster so that it drops its weapon. He fires again, but the monster leaps towards the and Adler accidentally wipes out a dozen aliens.

“Stop!” You cry. “Let me!” You grasp at this perfect chance to prove yourself to Street, Adler, and the Alien High Commissioner. You grab the weapon from Adler’s hand, and point it at the Alice-monster as it enters the portal. Without a moment’s hesitation, you pull the trigger.

“What are you doing?” Adler screams. “Stop, it’s too dangerous!”

You grin with satisfaction as the stream of dark energy engulfs the monster. Its massive form unravels into writhing strands of DNA, strung like fairy lights across the sky.

You try, but your hand is magnetised to the trigger and your feet are anchored to the spot. You can’t move, you can’t stop: you can only shoot.

The portal, shimmers and blurs in spiralling energy waves. A chorus of terrified aliens fills the air as a stormfront of dark purple clouds forms over Spook Central. You draw in ragged breaths.

The portal grows enormous, throbbing in a deafening feedback loop as inter-dimensional tectonic plates shift and grind around you. A cosmic sinkhole opens at the base of Spook Central, and the mighty windowless tower crumples to the ground like a demolition job. Next, the ‘Gabba stadium itself begins to crumble and fall. Buildings, cars, everything is annihilated; and all you can do is stand there, feeding the disaster.

You watch in horror as the High Commissioner, Adler, and even Street are sucked into the gaping maw.

Until, at last, it is your turn. You are drawn into the final, massive implosion as the portal destroys even itself, leaving behind the devastated wasteland that was once Woolloongabba.