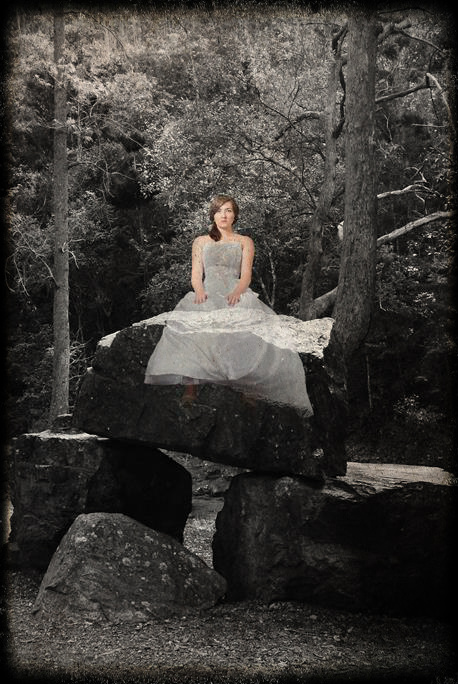 The transparent girl is waiting for you when you arrive, sitting on the balanced rock. She looks pensive, like this was a happy place, turned sad. She floats down to stand in front of you, one finger stretching toward you. She cocks her head, asking permission, and you nod.

Her finger connects, and you see a vision: her standing on the rock with a man, arms out, laughing. They are in love. They are happy.

And then you see another image; of her hours later, limping from down the path ahead, alone—dress disheveled. She’s gone white, and when she gets to the rocks you stand before, she leans against them, panting.

There is a stone platform behind them. She lays down to catch her breath.

But she doesn’t get back up. Instead, she gets whiter and whiter. And then her breathing starts to slow. She’s in pain. Horrible pain.

And then her breathing stops.

The vision fades. The ghost is before you once more. “Who was the killer?” you whisper. “Why can’t you just show me?”

She shakes her head, and you frown. Maybe she can only show you places? Places from when she was alive. Places that were connected to her death?

She gets down on her knees in front of the balanced rock, her legs drifting through the peaked stone at its base. Then she points through the hole. She motions you closer. She wants you to look at something.

You do as she asks, standing in front of the rocks, then bending down to look from the peak of the pointed rock through the hole and out the other side. There is only one thing visible beyond. Standing tall and proud; reaching up into the sky.

You say its name and she nods, then holds up one finger.

She shakes her head.

“The first letter?” you guess again.

She nods, motioning for you to write the letter down.

A leap of intuition hits you. “Are you going to spell out the name of the killer?” you ask.

She nods vigorously, and you smile. Finally, a way to get an answer!

She motions you further down the path to a curved, abandoned shelter close by on the left. This is your next location. Be sure to write down the first letter of the killer’s name before you leave!

When you reach the next location, click this link. 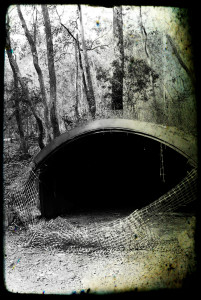