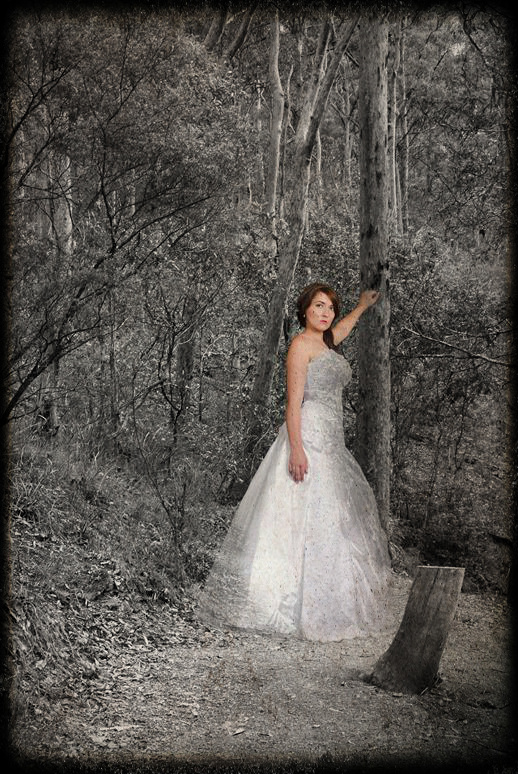 The ghostly girl stops at the stump, then moves to a tree growing in the middle of the path only a few meters beyond. You notice old, faded graffiti.

A wave of sadness washes over you—her name would have been on here once, scratched with a knife onto bark by a young couple—a way to announce their love to the world.

Wait a minute. It wouldn’t have just been her name—it would have been his too. But in all of your visions you’ve never once seen him. Could there be a reason for that? Could he be the killer?

You tell her your theory and the girl bursts into silent sobs. But then she raises her head, tears in eyes, and shakes her head violently.

Oh. That’s not what you expected. You’d been sure it must have been him. You think, hard, about what you’ve seen so far. A couple that had met at the church, and gotten married sometime later. That had laughed and played together. That had been so in love that they’d carved it into the very timber itself.

Two people had walked down this path together. But only one had come back, and she’d been found dead by the balancing rock.

Of course the townsfolk would have suspected him. Especially if he’d never been found; his bones in an unmarked grave, or washed down the nearby creek.

She’d become upset when you asked if he was the killer. Because that’s what everyone would think. And now, finaly, you comprehend. You’re here to clear his name. To find the real killer.

You nod in understanding. The girl smiles. She holds up her hand, fingers outstretched, then points to each finger one at a time, mouthing the alphabet as she goes. She stops at the fifth letter. You say the letter and she nods—this is your next clue—and then she motions you onward.

You have a vision of a tree down the path filled with lover’s graffiti, and then another just past it signed by Captain Cook himself, way up high.  The path splits just beyond.

Take the path that slopes up, crossing a tiny floodway and continuing uphill. When you see a tumble of large rocks and a short path on the right, leading to an outcrop of stone over the creek, take it. The girl will be waiting for you, standing on the stones, looking down on the creek below. You’re getting close—you can feel it.

When you reach the next location, click on this link. 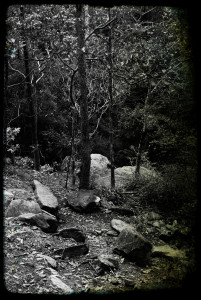