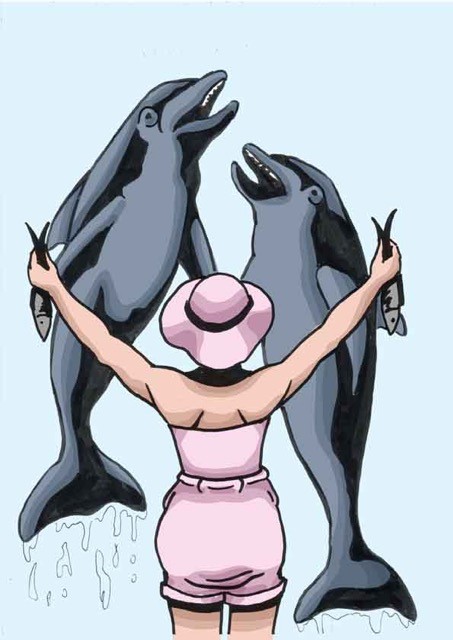 You and Grandpa make it to the Porpoise Pools panting and breathless just as the crowd starts to jostle and cram in towards the edge of the pool for a view of the action.  Sharky Jack barks his encouragement over a crackly loudspeaker.

“Come forward, Ladies and Gentlemen, the world’s first trained porpoise show. Be amazed as these beautiful creatures eat from our hands and leap and play for our entertainment,” he roars.

You shepherd Grandpa into pole position poolside, squeezing and apologising your way through the crowd. Then you spot Grandma and Soldier Boy up near the diving board from which Sharky Jack holds court and you can feel yourself seethe. You swear, if Soldier Boy goes in for the pash you won’t be responsible for your actions. You try and distract Grandpa so he doesn’t see them.

“Okay, this is how it goes. When Grandma gets called up on the diving board to feed the porpoise get ready,” you coach him.

“What for?” he asks, quite reasonably.

You lock eyes and try to muster the sort of tone usually reserved for junior football coaches before a big game.

“Look. This is it, your big chance. Grandma’s going to lose her balance and topple into the pool and you have to jump in and save her.”

“Me?” he asks, incredulous.

“Yes, you Grandpa. That’s how the family folklore tells it. You’re the great rescuing hero earning the undying love of the fair maiden.”

Instead of looking steely-eyed and inspired to fulfill his noble mission, Grandpa looks aghast. “But … but …. I’m not such a great swimmer,” he stammers.

‘WHAT!” you exclaim, louder than you intended, attracting curious stares. This is just about the last straw. “Come on, your entire lineage, my parents, my siblings, all our aunts and uncles and others yet to be born are depending on you. Can you swim at all?”

“Er, no, not really. I’ve just never really had cause to.”

You’re desperate now, the sweat rising up your back, hands shaking. “Look, it’s easy, just thrash about a bit, kick your legs, flail your arms about like you’re trying to fly. It doesn’t look too deep. Just get to Grandma and get her to the side of the pool. That’s all you’ve got to do.”

You’re pep talk is interrupted by Sharky Jack’s rolling commentary. “How about a volunteer from the audience?” he bellows, turning immediately, predictably, to your radiant grandmother.

She blushes, looks to Soldier Boy for encouragement, who urges her on. You can feel Grandpa trembling beside you.

You give him a sharp elbow to the ribs. “Come on Grandpa, you’ve got this.”

Grandma edges her way on to the diving board as Sharky Jack hands her a fish and Soldier Boy claps and hoots from the sidelines like a Soccer Mum whose had too much coffee. Grandma steps to the end of the diving board, holding the fish out at arm’s length, wincing and crinkling her nose, as if its odour offends her.

It all happens so quickly. In a flash of splashing water and screaming, a dolphin leaps from the sparkling blue depths and suddenly Grandma teeters and falls into the pool. From next to you, almost simultaneously, Grandpa releases a high-pitched whooping war-cry as if psyching himself for a charge into battle and leaps into the pool fully clothed. The crowd bursts into an excited babble as Sharky Jack urges calm and fumbles with a life-preserver mounted poolside.

In the pool poor old Grandpa is doing his best to follow your instructions. He’s at least got the flailing part down pat, wind-milling his arms frantically, though with the weight of his wet clothes he appears to be having trouble keeping his head above the surface. Solider Boy, meanwhile, is howling with mirth, bent over double and slapping his knees, at least until Grandma throws him one of those withering stares.

Oh, Grandma. What a woman. In the midst of this pandemonium, when all about her are losing their heads, there she is calmly treading water, sizing up the situation. She deftly breaststrokes towards your stricken Grandpa, now going under for the third time, expertly curls a supporting arm about his chest and is all set to sidestroke the pair of them to the edge of the pool when she discovers she can stand. Grandpa, it turns out, has had a near-drowning experience in shoulder deep water. Grandpa attempts to compose himself, standing now and making a show of concern for his rescuer.

“Are you alright ma’am?” he asks gallantly, as if he’s just slain a dragon. The tension is broken as the crowd explodes with laughter, all except for Soldier Boy, looking suddenly crestfallen.

The sight of the pair of them, fully-dressed, soaked through, engaged in some sort of strange pantomime to establish precisely who rescued who, is so deliciously absurd, you forget for a moment that your own future survival may just have been assured.