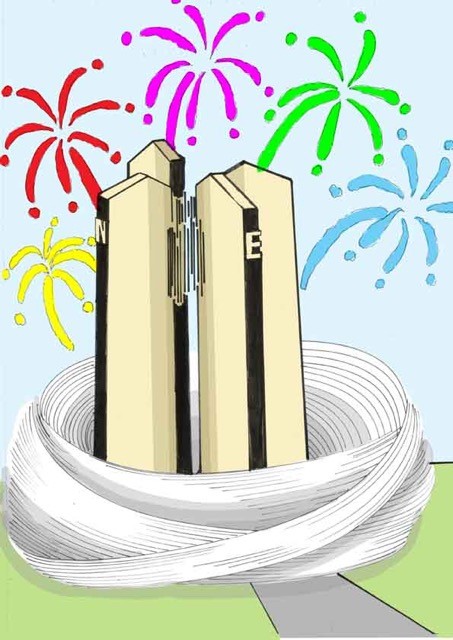 Grandpa has led you at a sprint up Boundary Street to the large Border Marker, and Captain Cook Memorial, a rather ugly concrete sculpture sitting at the top of Point Danger, that marks the divide between NSW and Queensland, and the so-called “Twin Towns” of Tweed Heads and Coolangatta.

You recall how Grandpa used to laugh about the fact that you could cross the road from Coolangatta to Tweed Heads and be not just in a different state but a different time zone during daylight savings.

“Queensland never had daylights savings because old Joh Bjelke-Peterson reckoned the sun shone out his arse and he wasn’t getting up earlier for anyone,” he’d say regularly.

You suddenly twig to Grandpa’s far-fetched but desperate plan. The two of you lock eyes knowingly as if you can read each other’s minds. If crossing the road changes time zones, what might crossing the border repeatedly, over and over again, do to the passage of time? It doesn’t make a hell of a lot of sense but what have you got to lose?

If you really have messed things up and Grandma and Grandpa won’t ever get together now, could you just erase any trace that you had ever traveled back in time and undo the damage?  Maybe this is what they meant about you not ‘buggering it up this time’. Maybe you’d nothing to do with them getting together and things turned out right when you removed yourself from the whole twisted saga.

“Quick, as many laps around the marker as you can, as fast as you can,” Grandpa coaches. “If we can just get you back to the future maybe it’ll all play out as it should.”

You approach the border monument and begin walking around its perimeter, slowly at first, then faster, then jogging, then sprinting, in a desperate, blurred tornado. You gasp for air, feel the sweat trickling down your face, vaguely registering the bemused looks of passersby and drivers. You start to feel light-headed and dizzy and gradually slow to a trot.

As your surroundings come into view you realise you’re back in the present day. You slow to a walk, pat your hands over your body as if to reassure yourself that you do, in fact, still exist. You’ve made it back in one piece and, you hope, so has Grandma and Grandpa’s relationship. But just as you start to congratulate yourself you can feel your essence fading, your body going transparent, the wind starting to blow through you.

Oh no! You were the one that got your grandparents together, you realise with your last conscious thought as you fade from existence, your mission a failure.