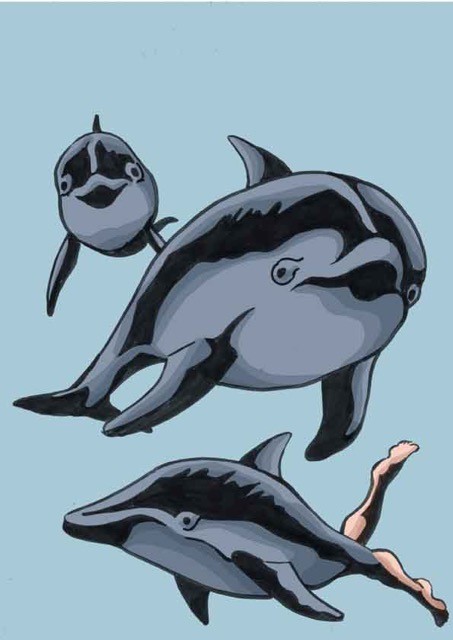 You’ve followed the couple at a discrete distance all the way to the Porpoise Pools trying to eavesdrop on their conversation, looking for any crack to drive a wedge into. But Soldier Boy barely draws breath and Grandma seems to be hanging on his every word. This is a disaster. You can feel your essence fading. And where the hell is Grandpa? Fate demands that he show up at this pivotal moment for his, and your, future. What the hell kind of game is he playing?

Grandma and Soldier Boy have set up in prime pool-front position near the diving board for the show and Sharky Jack is working the crowd as the dolphins circle the pool. You’re torn between squeezing through the growing crowd to try and get a spot poolside, or looking out for Grandpa. Finally you see him limping along the beachfront towards the pool as if he has all the time in the world and his entire family tree doesn’t hang in the balance.

You’re very nearly tapping your foot in seething impatience by the time he reaches you.

“Where the hell have you been?” you demand, forgetting in your rage that as far as Grandpa’s concerned he’s never set eyes on you in his life.

You snap to. “Ah, yeah, no, not really,” you stammer, hurriedly thinking of a pretense for your interruption. “I just spotted you before at the beach games and sensed that you and a certain young lady were experiencing a powerful romantic chemistry,” you hurriedly explain. “I’m an associate of Mr Hokey Pokey himself, Doug Roughton, and charged to help young holidaymakers like yourself strike up a romance. I have an instinct for these things and I believe I’ve found your perfect match.”

Grandpa’s staring at you warily now. “Look, I don’t know what your caper is but leave me out of it. I’ve just come to see the show like everyone else.”

“Great, let’s go!” you enthuse, as if you’re suddenly best buddies. Grandpa harrumphs in his trademark manner as he pushes past you and makes for the pool. You breathe a sigh of relief and follow like a too-eager puppy.

You feel like you know what’s going to happen before it unfolds. Grandma gets called up to feed the dolphins. She edges out to the end of the diving board, holding out a fish at arm’s length. A dolphin startles her with a prodigious leap to snatch the fish from her hand and she topples over into the pool.

Grandma’s floundering in the deep end and going under for the third time and you can’t just let her drown or you’re definitely stuffed. Soldier Boy ain’t budging either so you leap into the pool, swim to Grandma and manage to sidestroke the pair of you to the side.

You’re both breathing heavily and Grandma’s got her arms around your neck gripping you tightly as her chest heaves and she stares up at you doe-eyed.

Well, this is … awkward.

“Oh my, you’re so brave,” Grandma pants breathlessly. “How can I ever thank you?”

Soldier Boy’s looking sheepish, and Grandpa’s nowhere to be seen.

“Oh no, I can’t stand those American soldiers coming in here like they own the place. I was just trying to make another chap jealous.”

She looks around the crowd. “But he seems to have lost interest. What are you doing later?” she asks pointedly, staring deep into your eyes.

This is altogether the strangest sensation you have ever experienced, being hit on by your own grandmother, dripping wet, in a pool full of dolphins while a slack-jawed crowd watch on. You never knew Grandma was so… racey and liberal back in the day. Geez, if she wasn’t your grandma… You hurriedly dismiss the outrageous line of thought.

“Ah, that would be highly unorthodox and inappropriate,” you protest, dropping Grandma abruptly into the drink and clambering out of the pool. You can feel your essence fading and the outline of your body growing faint. As you hurry to heave yourself out of the pool your arms give way and you fall back into the water. But instead of feeling short of breath and scrambling to the surface you find yourself effortlessly gliding through the water, emitting strange squeaking sounds, and gripped by a sudden craving for sashimi. Those squeaking sounds, you suddenly realise, are coming back at you from the other dolphins in a form of sonic communication you can understand. OTHER DOLPHINS?!

Holy Cetaceans, Batman! It would seem your old life is gone forever and your new one promises to be an interesting one.

“Don’t worry,” one of the dolphins squeaks at you. “Next king tide we’ll bust out of here, but the food’s not bad in the meantime.”