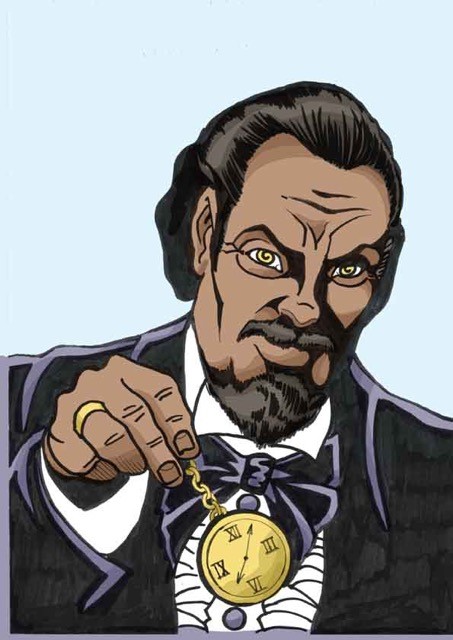 You walk to the stage set up in front of the Surf Club where a striking, olive-skinned fellow with moustache and goatee is preparing for some kind of performance, wildly over-dressed for the beach in dinner suit and bow tie. You look around you as the crowd gathers but you can’t spot your grandparents. As the announcer introduces Ron Rico the Hypnotist the crowd surges forward and you find yourself pushed to the front of the stage, as dramatic music swells over the tinny beachfront speakers.

“Ladies and gentleman, may I have a volunteer from the audience, please?” Ron Rico calls with a dramatic sweep of his arm. “What about you?” he asks, gesturing to you.

You hesitate, unsure if you should get enmeshed in events. “Ah, no, look, I’m… I’m feeling a little unwell,” you protest meekly.

“Come on, don’t disappoint the crowd. Up you come,” Ron Rico insists, hauling you up by the shoulder.

Well, you think, at least from the stage you might spot your grandparents.

“Now, watch closely,” Rico says as he pulls a fob watch from his pocket and holds it up before your eyes. It sways gently back and forth. “Now, stare at the watch and clear your mind of all thoughts.”

His presence is powerful. You find yourself following his instructions obediently and feel your consciousness growing fuzzy.

“When I click my fingers you will become …” Ron pauses for dramatic effect. “A BUSH TURKEY!”

The crowd have been waiting for this and bellow with collective laughter.

The next thing you know you’re darting about the stage, scratching at the floor with your feet and flapping your elbows madly. The crowd roars with laughter but you are powerless to stop. It’s preposterous but you’re suddenly gripped by a conviction that you are in fact a bush turkey. You spot others of your species scratching about in the undergrowth up towards Greenmount Hill and you leap off the stage and give chase.

But then you spot another strange, feathered creature. It’s none other than legendary beach entertainer Billy Rak running out for a surf in his trademark American headdress. And in your current guise as a bush turkey you find yourself strangely attracted to him and his spectacular plumage.

Greenmount Hill Lookout: Chase your fellow bush turkeys up Greenmount Hill? It’s more likely you’ll find a mate amongst the numbers… Follow the path up the hill and take the stairs all the way to the lookout at the top of Greenmount Hill.

Billy Rak Lookout: Chase the feathered surfer as he trots around Greenmount Point to the stairs leading down to the water? That’s some fine plumage and how are you expected to contain your most basic animal urges?