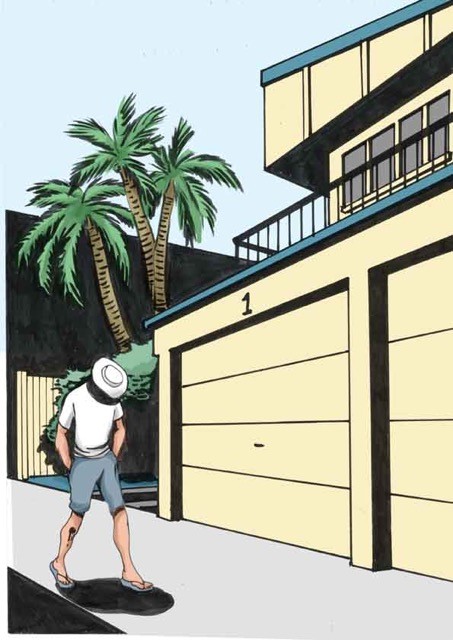 Sure enough, you spot him plodding slowly up Eden Ave towards you. Unless you can lift the old boy’s spirits and get him back in the hunt for your grandmother’s affections you’re doomed.

You recall something from their reminiscences about sealing their love at Jack Evan’s Porpoise Pool at Snapper Rocks, when your grandmother fell into the pool while feeding the dolphins and your grandfather valiantly came to her rescue.  You figure if you’re going to repair this romance you’d better make sure you get Pop to the porpoise pools pronto.

He approaches the holiday flats where you’re standing conspicuously on the street corner and you do your best to casually initiate a conversation. “That was quite a beating you took there,” you say, as nonchalantly as possible.

Your grandfather turns to look at you inquiringly and you’re struck by what a good looking man he is, in stark contrast to the wrinkled figure you know, with his capillaries, sun spots and protruding gut. His searching gaze seems to strain for recognition.

“Not yet. Just a fellow traveler who doesn’t like the way that soldier sucker-punched one of our boys. We can’t let them carry on like that, even if they’re guests in our country. And I saw the way that young lady was looking at you. She only had eyes for you until Soldier Boy turned up,” you insist.

“Ah, what hope’s a mug like me got against a man in uniform? The young ladies go bananas for them,” Grandpa says, shoulders slumping.

“Come on. You two have a beautiful future together.”

Grandpa looks at you, suspicious. “How do you know?”

“Just a hunch. You know the other thing the ladies love? Dolphins. What say we head up to Sharky Jack Evans Porpoise Pool and see if we run into her there?”

“Why do you care so much?” Grandpa asks, quite reasonably.

“Just hate to see a blossoming romance flounder. Like the Beatles sang, All You Need Is Love.”.

“The who?” Grandpa asks.

“No, not the Who, the Beatles,” you reply, before registering Grandpa’s confusion and your historical faux pas, at least a decade before either band exists.

“Forget it. Look, let’s head up to the Porpoise Pools. What harm could there be?”

But Grandpa seems to have had enough of your rambling. “Look I appreciate your concern, but this is starting to creep me out.”

Grandpa turns to leave and you figure it’s time to come clean, or risk ‘buggering it up’ all over again!

“I’m your grandchild!” you blurt out. Like ripping off a band aid you hope it will hurt less.

Grandpa turns to stare at you. You blunder on desperately. “I’ve travelled from the future to make sure you and grandma get together, otherwise I’ll never exist. I bumped into you in the street earlier outside the CWA Hall and threw out your timing to meet her and old Soldier Boy slipped in instead.”

It sounds absurd even to you as the outlandish words leave your lips. But Grandpa seems less astonished that you might have expected. “I thought you looked familiar.” He muses. “So, that classy dame, I’m meant to marry her?”

“Are we happy? In the future?”

“Deliriously so,” you insist.

“We have grandkids?” Grandpa says to himself, getting all misty eyed. “Shit, we better do something then. But what?”

“Come with me to the Porpoise Pools and you’ll get your chance to win the girl. Trust me.”

Grandpa ponders this for a moment then gestures to his still weeping knee. “I’ve got a better idea. Quick, to the border marker, it’s not too late to undo this mess.”

Jack Evans Porpoise Pools: Stick to your guns and convince Grandpa to join you at the Porpoise Pools, so the romance with Grandma, and your future, can be salvaged?  Head towards Rainbow Bay along Ward Street and turn right along the beachfront path to Snapper Rocks.

Boarder Marker: Follow Grandpa and head to the Border Marker to see what his plan is? He’s never steered you wrong before. Head the opposite direction to the beach up Ward Street and turn left into Boundary Street until you reach the Border Marker at the top of Point Danger.