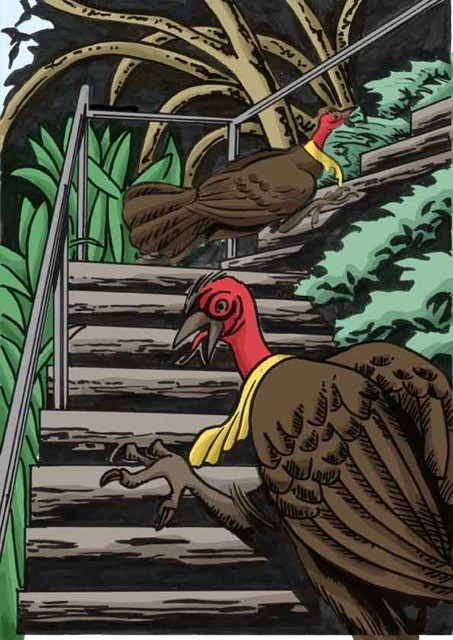 You run up the stairs to Greenmount Hill pursuing the other bush turkeys, flapping your elbows madly like fleshy wings, gobbling quietly to yourself and scratching at the ground with your feet as if you might build a nest. You spot other bush turkeys through the undergrowth but the terrain looks a bit too steep and muddy to chance it so you stick to the stairs, feeling like a bit of a failure as a bush turkey.

You emerge at the top of the stairs to a grassy park, startling a few picnickers and couples. You spot a particularly attractive bush turkey scurrying off to your left, towards the lookout at the top of the Point overlooking the ocean, and give chase. As you reach the lookout the bush turkey takes a sharp detour to the right and ducks into the undergrowth. An old-timer leaning against the railing at the lookout has observed your fevered pursuit of the turkey and looks you up and down searchingly.

“They don’t make real good eating anyway. A too bit stringy,” he comments, assuming you’re a kindred soul down on your luck and in search of a feed. “And they’re surprisingly quick, can turn on a dime, just like that.” He clicks his fingers, and instantly Ron Rico’s spell is broken. You look around yourself, disoriented, and try to re-group.

“Ah, yeah, no, just getting a spot of exercise,” you stammer to your new friend.

You gaze out at the spectacular view in front of you, the Pacific Ocean shimmering in all its dazzling beauty, as surfers and beach-goers go about their carefree play.  What on earth are you doing here? Suddenly it comes back to you as your crazed bush turkey consciousness evaporates.

Grandma and Grandpa! Where could they be?

You gaze down on the scene below and spot a couple walking along Rainbow Bay, a young woman and a man in military uniform. Even from this distance you recognize your grandmother in an instant, you can see it in her immaculate dress sense and graceful gait. But where is Grandpa? And who’s the bloke in uniform? They appear to be heading towards Snapper Rocks and Jack Evans Porpoise Pools, where you can see a crowd is beginning to gather.

The Jack Evans Porpoise Pools, Snapper Rocks: Pursue the couple and try and intervene?  Descend through the forest of Norfolk Pines down to Rainbow Bay and on to Snapper Rocks in pursuit of the couple. Clearly Grandma’s been busy while you’ve been off with the birds and hooked up with the wrong fellow.

Jack Evans Boat Harbour: Go looking for Grandpa and encourage him to cut in on this unknown soldier before it’s too late? It really needs to be Grandpa who saves the day, doesn’t it? How much direct ‘help’ should you actually give? You remember the Boat Harbour is a favourite haunt of his so you head there. Walk down the road, past the Surf Club, across Boundary Road and around to the park by the Harbour.