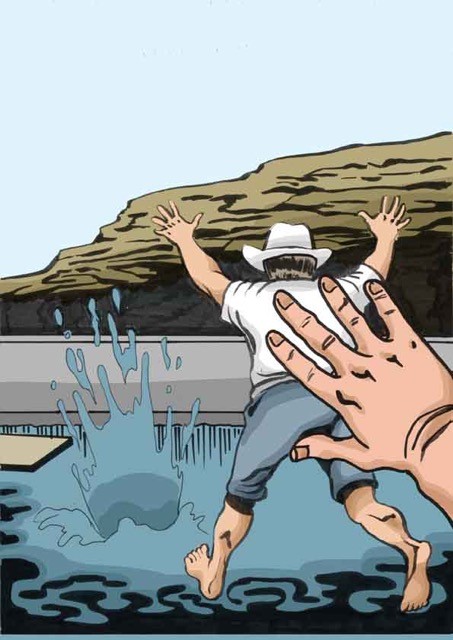 You make it to the Porpoise Pools and find a spot in the crowd poolside just as the show is about to start. Jack Evans’ crackly, amplified voice is whipping the audience into excited anticipation. You cast about the crowd anxiously for any sign of Grandpa. He’s got to be here somewhere. Fate demands it.

You spot Grandma and Soldier Boy walking along the foreshore at Snapper Rocks towards the Porpoise Pools. Then you see Grandpa, he’s spotted them too. A look of hurt furrows his features into a scowl. You fall in alongside Grandpa who’s still limping from your collision, hoping to at least offer some moral support.

The crowd pushes in around the edge of the larger of two pools, where Sharky Jack Evans is standing out near the end of a low diving board holding out fish to the expectant dolphins. They circle and leap through the air obediently as the crowd oohs and aahs. It’s an impressive show in this crude, concrete ocean bath that was surely never intended for this purpose.

Legend has it that local fishermen the Boyd Brothers accidentally netted a couple of dolphin during an early morning fishing trip and deposited them in the ocean pool Jack ran as a prank. Jack soon realised more people were coming to see the dolphins than ever came for a swim and so an accidental tourist attraction was born.

You see Grandma and Soldier Boy have taken up position by the edge of the pool near the diving board. Grandma is apparently keen to try feeding the dolphins. You do your best to maneuver Grandpa closer to the pool’s edge. One of Jack’s daughters and then a couple of kids take turns feeding the dolphins and you fear the moment might be lost, but then Sharky Jack’s keen eye spots Grandma in the crowd and he singles her out.

“What about you, young lady, you look like you’re ready to have a go.”

You can feel Grandpa bristle next to you.

“Welcome her up ladies and gentlemen,” Sharky Jack tells the crowd and they respond eagerly.

She edges out towards the end of the diving board with the bucket of fish Sharky Jack has given her. The dolphins circle about the pool expectantly. Grandma plucks a fish out and holds it out at arm’s length off the edge of the diving board. A grinning dolphin leaps through the air and snatches it neatly from her fingers as she recoils.

Grandma looks at him uncertainly and then turns her gaze to Soldier Boy who is nodding eagerly. She pulls two fish out of the bucket this time and holds one out with each hand, teetering precariously at the end of the board.

You squeeze in next to Grandpa, sensing a critical moment.

When two dolphins leap from the air at once and snatch the fish from Grandma’s hands she rocks back, then over-corrects as she struggles to retain her balance and finds herself falling forward. She lands with a great splash and Soldier Boy emits an enormous belly laugh, apparently convinced the sight of your Grandma nearly drowning is a cause for great hilarity.

Then you realise you haven’t heard a second splash and Grandpa is still next to you. Why the hell hasn’t he jumped in after her? Hasn’t he read the family script? This is his big chance to be a hero and win the girl but he’s just standing there rooted to the spot looking unsure of himself. You sense your moment. You put your hand on Grandpa’s back and give him a firm shove as you whisper in his ear, “Save her!”

Grandpa lands in the pool with an even greater splash. Grandma is shrieking hysterically and struggling to keep her head above the water, weighted down by her sodden clothes. Grandpa, snapped to attention by the chilling embrace of the water, acts with a swift decisiveness. He swims to her and wraps an arm around her middle and sidestrokes expertly towards the shallow end of the pool.

Grandma is staring at her rescuing hero with doe eyes as he scoops her up in his arms and carries her up the steps out of the pool. The crowd cheers.

Grandpa strides through the throng with Grandma in his arms, like Richard Guerre in An Officer and a Gentleman, the both of them dripping wet. You slip quietly away from the crowd brushing the palms of your hands together. Your work here is done. Now, there’s just the small matter of getting back to the present.