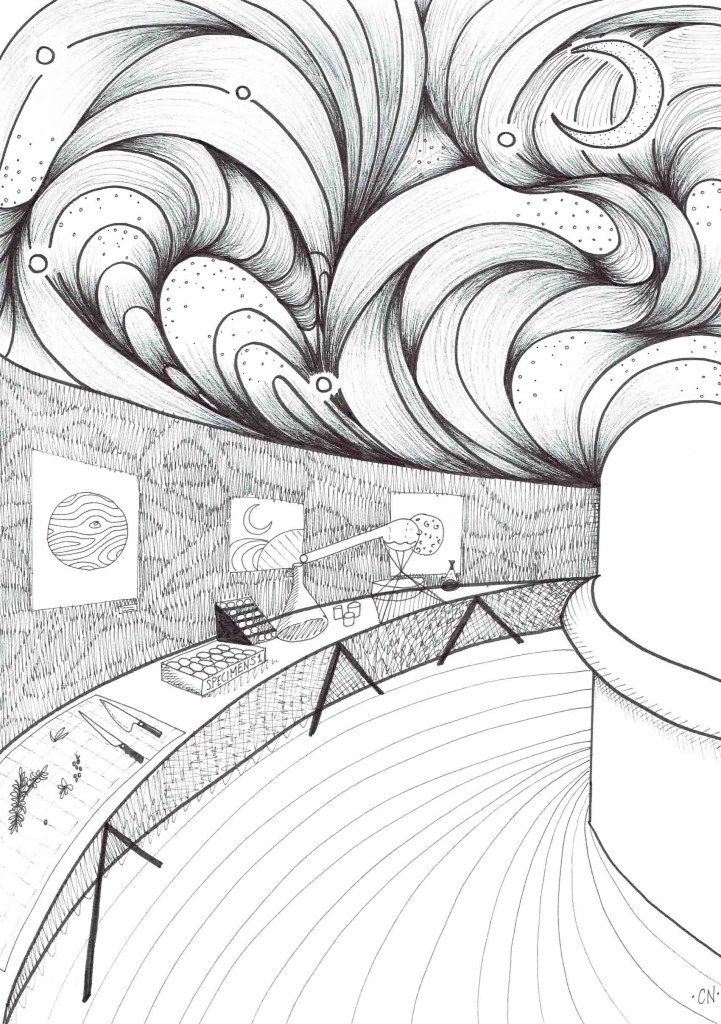 You spot Uncle Frederick just inside the doors of the Planetarium. It’s dark and the smooth curves of the building give it a futuristic feel. Uncle Frederick has set up a portable lab. There is a thick cable running from the lab, along the brick path down to the engine of his blue Volkswagen Beetle.

‘Ah, there you are, I was getting worried.’ He turns back to the bench in front of him. There is a linked network of tubes, beakers, and mixers. There is a glowing purple liquid in one beaker and smoke rising out of another. There are also two empty beakers. ‘We’ve got no time to lose, rematerialise the ingredients into the beakers.’

You open the Cure app on your phone and scroll through your list of plants. You click on the Comfrey sample and you scan the screen until you find a green button that says ‘Rematerialise.’

You look at your uncle, confused.

‘Hold it over the beaker,’ he says.

You hold your phone over the first beaker and tap the button. Several large, green furry leaves pop into existence and fall into it.

‘Impressive huh? I invented it myself.’

You repeat the process with the Aloe leaf. Uncle Frederick looks at the two ingredients and then nods knowingly. He pours a bottle of water in each beaker and then flips a switch on a central console. As the water starts to bubble he stirs each beaker a couple of times with a wooden spoon.

While you wait you ask him about the text message he sent earlier.

‘I’m not good at multitasking. Had a few things on my mind and some must have crept in.’

‘Well,’ you say. ‘Seeing as you’re trying to create a cure to save the lives of everyone in Brisbane, I won’t tell you off for scaring the crap out of me.’

‘Probably for the best,’ he says and keeps stirring.

You notice a few figures outside walking up towards the entrance of the Planetarium. Your heart beat quickens. One is the old man from the Fragrant Plants and Herbs garden slowly making his way towards you. You point him out to Uncle Frederick who, nods, and mutters, ‘Quickly, quickly.’

After what feels like an eternity there is a ding that sounds like an oven timer and Uncle Frederick grabs a beaker of greenish liquid. It smells terrible, like someone had kept curry in a pair of wet, dirty socks for a couple of weeks.

Uncle Frederick bends for a duffle bag under the bench and starts rummaging.

He pulls out a small plastic spray bottle. You raise your eyebrow as he unscrews the lid and pours the green liquid inside. He passes the spray bottle to you. ‘Here,’ he says. ‘Point it at one of those infected and see what happens.’

‘See what happens?’ you say. ‘That’s not exactly science, is it?’

He waves a finger at you. ‘That’s where you’re absolutely wrong. True science is exactly that! Throwing things together to see what happens.’

You shake your head thinking other scientists you know would strongly disagree, and take aim at the old man as he walks through the automatic doors. A fine green mist sprays out, but doesn’t reach. The old man grabs onto your wrist quick as a snake. You jerk your arm free, but you feel his nails claw against your skin. You quickly adjust the nozzle to ‘jet’ and try again. You shoot the green liquid at his face and he collapses in a fit. He starts convulsing on the ground and then with a pop he turns into a cactus.

‘Hmph,’ Uncle Frederick says. ‘An organic on your first try. Not bad.’

‘Not bad?’ You gesture wildly. ‘I just turned a man into a cactus! What are his kids going to say? What about his wife–’

Suddenly you notice a set of wispy purple tendrils radiating from the bloodied scratch on your arm. They are growing before your very eyes, up your forearm and past your elbow. ‘What on Earth is that!?’

‘Oh,’ Uncle Frederick says. ‘That’s one of the new symptoms. I didn’t tell you about that one?’

‘You might want to take a hit of that yourself.’ Your uncle signals towards the spray bottle.

‘No, no. The disease affects younger and older people differently, so the cure should theoretically do the same.’

‘There’s no time to argue.’

You sigh and spray the mist on your arm, and for good measure, in your face, breathing deeply. You blink a few times and look down at your arm. The scratch is still there, but the purple tendrils are retreating. In half a minute, they are gone. You breathe a sigh of relief.

‘You did it!’ Uncle Frederick cries. ‘We need to get this cure in the water supply immediately.’

‘But what about the older victims…what about you?’

‘That’s just the price we pay. We’ve run out of time.’ Uncle Frederick swallows. ‘I don’t mind being a cactus. As long as you make sure I get enough sun.’

You have managed to create a cure for the younger generation, but at what cost? You’ve forsaken your grandmother and grandfather. Uncle Frederick. The ones who raised you. They are all at risk now. Hopefully their forgiveness is strong enough to repel the guilt you’ll feel as the older victims start dropping like flies.