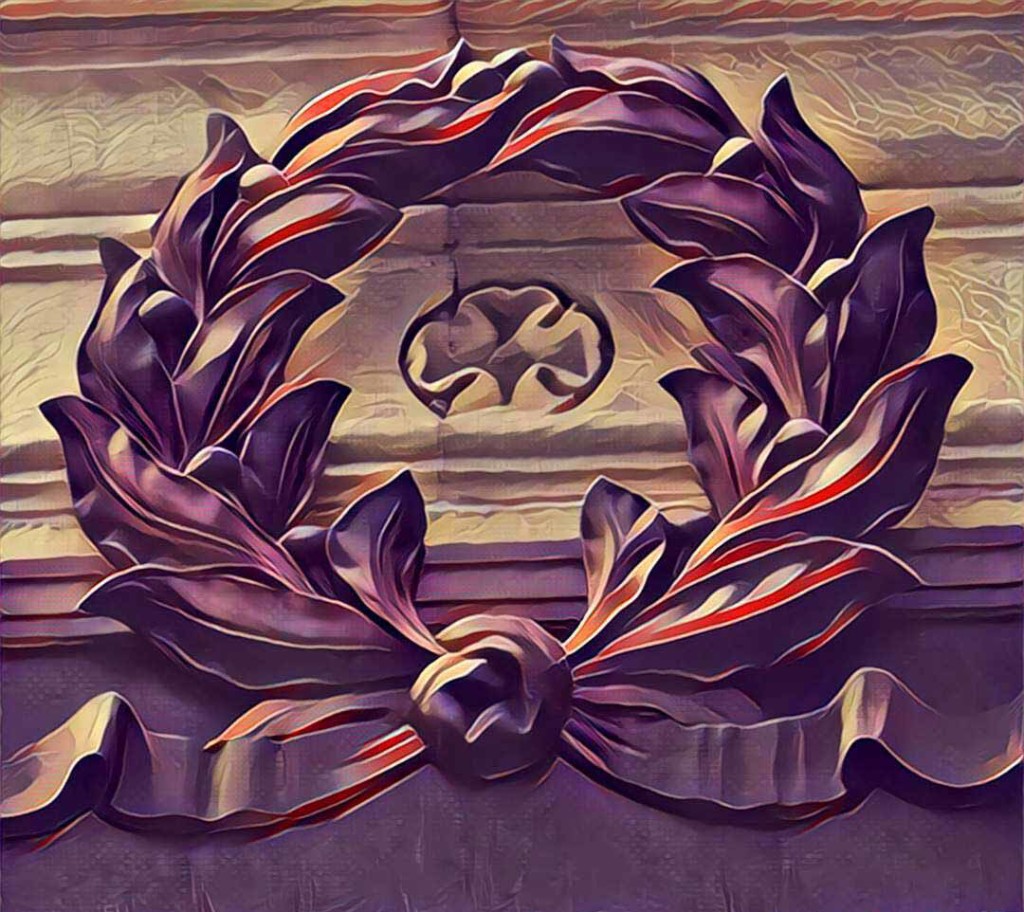 You can hear me, can’t you?

Ok you need to calm down. Take a picture using your camera application of that interesting circular shape on the wall outside the arcade or you can sketch it if you’ve got a pen and paper. Act natural. Having someone call the police because you are acting strangely would be a disaster. Imagine trying to tell them you’re hearing a voice no one else can hear. You’ll end up in a padded room.

You think I’m over reacting. See the man sitting on the steps selling the Big Issue?  You caught him in your photograph. He’s tolerant of weirdos. But the woman with the expensive suit walking past that wall sculpture in the park on the left and taking out her new iPhone, not so much. You can bet she’d call the police.

No, I am not God. Well, actually you can think of me as a small God. Diminutive but powerful, yet modest. The program on this device you’re holding is the means by which I’m communicating with you. In fact, you’re not actually hearing me at all. I’m utilizing electromagnetic pulses and accessing your memory of speech very selectively. But we won’t get into electromagnetic dimensional geometrics. The main thing is that your device is all powered up. This is one time when running out of battery really could kill you.

I’m not trying to frighten you, but I am your guide on your quest and I have to tell you, a little anxiety would not go amiss. Actual fear will become unavoidable later, but we can’t have you incapacitated with terror at Nexus One.

I’ll explain the why and wherefore of nexuses, and other vital information, deeper into this quest. Suffice it to say that now you are in Nexus One.

The first thing to do is make sure you don’t lose this device. It’s important because it will enable me to keep track of you. It’ll also be handy when you need to find your way from one nexus to another as there is a ‘Map’ button, function, thing.

I’m afraid walking away is not an option. By hearing and responding to me, and by capturing your first omicron, you have entered into a formal and binding contract. From here on, your choices are limited by the parameters of the quest.

No, you didn’t get to read the fine print. That is not how quests work. A hero always commits to the path before understanding it.

No you can’t just strike out in any old direction.  Haven’t you heard all those fairy tales about the dangers of leaving the path? No, the big bad wolf would not get you. The dangers you face on this quest are more terrifying than any fairy tale monster. No, I didn’t say the paths of the quest were safe, but there are diverging paths at every nexus and you get to choose between them because choosing is what a chosen one does.

There are no correct paths. There are paths and choices, and if you choose the right paths, your choices could save you and your world.

No, you’re definitely a chosen one, otherwise I couldn’t have spoken to you.

More about omicrons later on. For now, a couple of things to remember: you can hear me on the paths of this quest, so long as you have your device. But you’ll hear me best within a nexus, so move between them as fast as possible. Also, remember that on this quest, although you are a chosen one, your choices define you, and ultimately dictate whether you are THE Chosen One.

Whether or not you believe I’m a figment of your imagination, you need to get moving.

Why?  Well for one, all nexuses leak energy when inhabited by a chosen one, and that energy is like sending up a flare that shows your location. Now enough chat. Time to get moving. You’re in Queen Street. From this location, you have two nexus possibilities.

You could simply cross the Post Office Square park and the next road to ANZAC Park. The nexus there will be stable giving you time to find an omicron. Note the two palm trees and two lights bracketing the clock tower in front of you.  Doubles are good Juju.

The second possibility?  Well, that’s a more complex move because it will take you longer to get there. Timing matters because the moment you chose, the Nexus begins to form and a nexus only stays stable for a limited period.

Move?  Oh that’s a chess reference. No, it doesn’t surprise me that you don’t know much about the game.

No that was not a sneer. You are very touchy but I am going to put that down to your being out of your depth.

Ok, to get to the second location, aside from moving quickly, you’ll need to cut back through the arcade you came through behind you. Now that’s risky because the déjà vu factor gives off a psychic flare you would not believe. But if you move fast and don’t look at anything you looked at the first time, you should be ok. Try walking differently too.

I don’t know – I’m not good at the physical stuff.

Why choose the harder option?  Well the omicron at St Stephan’s church is stronger. That may be important if the other Nexuses you choose have weaker omicrons.

Of course I talk about them as if they’re alive.  You think things that breathe and bleed are the only things that live?! You organics are so full of yourselves.

No, I’m not mad and of course I’m going with you either way! I have no choice. Think of me as your grown up imaginary friend, all right, or psychotic manifestation, whatever works for you. A smarter, imaginary adult friend who has your best interests at heart, maybe and who you should listen to, or die. Now, choose and act.

Make your way to:

Nexus 2A: ANZAC Square where the omicron is weaker but the nexus more stable. Take the stairs in Post Office Square to the food court below and the underpass under Ann Street to ANZAC Park

Nexus 2B: St Stephen’s Church which is further away but the omicron is stronger. Go through Post Office arcade, and cross the lights at Elizabeth Street to the church grounds on the other side of the road.