The Treasure of Light

Search through a city’s secret past, and find an ancient treasure before it’s too late! 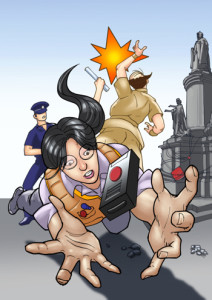 You have discovered an ancient document, a clue leading to the lost treasures of Colonel William Light, surveyor and architect of Adelaide. Throughout the years, clues to the treasure’s location have been hidden in the foundation stones of several historical buildings, forgotten until now. With your archaeologist friend Rhonda, you set out to find Light’s treasure, but there’s a catch – the ruthless tomb-robber Percy Graves is hunting for it too, and he is hot on your heels. Will you find the treasure in time, or will it be stolen from under your nose?

The Treasure of Light was produced with the assistance of