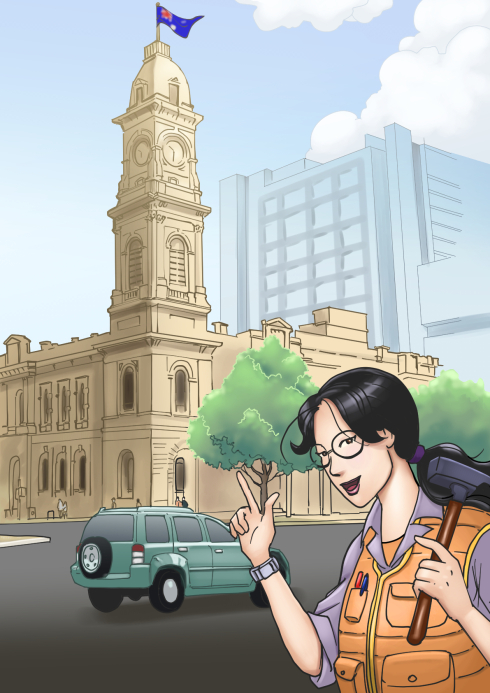 “We’re here,” you say, and check your disguise. You’re wearing a fluorescent jacket, hard-hat, and false moustache. “If we look like we belong here, no-one should look at us twice.”

“We better move quick,” your friend Rhonda says. “We’re soooo not meant to be doing this.”

Looking up at the Adelaide General Post Office, you’re awed for a second with the sheer size and age of the building. The clock tower is impressive, a finger of stone that looms above you. The unicorn and lion emblem of Great Britain speaks of the history, of a time when the colony of South Australia was truly the furthest outpost of the British Empire.

Once more you read the letter, the one that you found tucked into the back of an old book. The paper is yellow with age; so fragile that the edges crumble when you touch it. It’s covered with cursive writing, messy and hard to read:

To whomsoever receives this letter,

I have ended my life in infamy. Few agree with my placement of the city of Adelaide. My enemies have hounded me into illness, and soon into the grave.

When my hut burnt down, I lost almost everything, but I saved my most valuable treasures from the flames. This I trust to a future age, when a curious mind might seek out my legacy.

Though I shall not live to see the churches and great buildings I have envisioned, I have entrusted this treasure to a Secret Society. When it is built, seek the foundation stone of His Majesty’s Post Office, and remember me well.

When you found this letter, you knew there was only one person you could trust to help you: Rhonda, an archaeologist friend, recently returned from a treasure hunt in the Amazonian rainforest.

Rhonda surveys the ornate foundation stone, which indicates that a long-dead royal opened the Post Office in 1867. “Before he became the Surveyor General of South Australia and designed Adelaide, Colonel Light led an amazing life. He served in the British Royal Navy, and then joined up as a dragoon to fight Napoleon. When he was wounded, he spent many years in Egypt, helping the Pasha to build up a modern Navy.”

“This treasure could be anything!” Rhonda continues. “Mementoes from the Napoleonic war, an ancient treasure from Egypt, missing records from the foundation of Adelaide!”

Despite your combined excitement, you carefully chip around the foundation stone of the Post Office, as per the Colonel’s cryptic instructions. Technically, you’re breaking the law. But then who’s going to stop people who look like Council workers?

“This is weird,” Rhonda suddenly pauses. “This isn’t the original mortar. It’s still old, but someone’s pulled this stone out…and put it back again.”

You pry the foundation stone loose, and help her set it down. Peering through the dust you find…a copper cylinder.

You remove the cap, and find a single piece of paper, which reads:

GREETINGS TO A CURIOUS MIND

IF LIGHT’S SECRET YOU WILL FIND

SEEK THE UNION AS YOUR FIRST STEP

WHERE SOCIETY’S GOOD WORD WAS KEPT

“Looks like we’re on a treasure hunt!” you exclaim.

“It seems obvious but it could be the Union Hotel,” Rhonda says. “Or… Society… Good Word….There was a British and Foreign Bible Society on Grenfell Street. Perhaps that’s it?”

As you ponder the riddle, a glint of sunlight stabs your eye. You squint. Further down King William St a man is pointing a camera with a telescopic lens at you. He’s wearing a safari suit and has a pencil-thin moustache, with strands of hair combed across his bald head. He snarls as you spot him and leaps into a waiting car.

Rhonda curses. “That was Percy Graves. Treasure hunter and all-round scoundrel. He must be after the treasure too. We have to hurry!”

The Union Hotel [70 Waymouth St]: Decide the clue points to Colonel Light’s treasure being at the Union Hotel? Head north along King William Street and turn left onto Waymouth Street.

The Adelaide Coffee Bar [73 Grenfell St]: Decide the clue is more tricky and head to the remains of the British and Foreign Bible Society? Head north along King William Street and turn right onto Grenfell Street, heading east. Your destination is on the south side of the road.