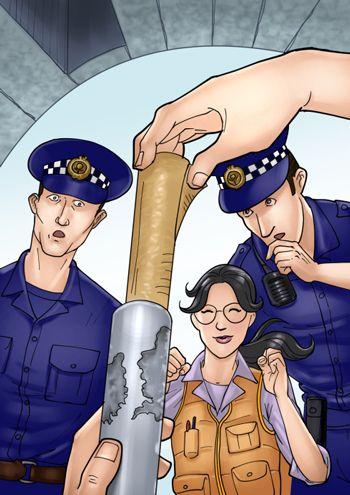 You’ve left Percy tied up at Her Majesty’s Theatre and the sound of police sirens is getting louder. You need to find something to show for yourself, and quick.

The Supreme Court is sturdy and plain, a uniform wall of cut stone, filthy from years of rain and smog. There’s no foundation stone to be seen.

“To hold Light’s burden in your hand,” Rhonda mutters to herself, examining the stone-work. One of the stairwells has been re-mortared, but when investigate, you find it was only a poor repair job on some crumbling stone.

Around the corner there are some doorways on the eastern-facing wall of the Supreme Court building, and you run your hands along the stone-work. The pillars around one door are marked with a strange symbol, like a bundle of sticks bound together.

“That’s a fasces,” Rhonda says. “Old symbol, meant to signify strength. One stick will break, but a bundle tied together is much stronger. Oh my god, that’s it!”

Poking around, she finds a hair-line crack next to the frieze-work, and there’s also one in front of you.

“Fasces means bundle in Latin, but it can also mean a burden, like a load that somebody carries. Come on, we’ve found it!”

Rhonda leans against the left-hand frieze work and you lean against the right. The carvings of the fasces give way with a loud click.

“Look out!” Rhonda shouts, and you leap out of the way. The heavy keystone at the top of the archway falls out, hitting the ground with a tremendous CRACK!

Examining the keystone, you find a hollow carved into the top of it. It holds another long narrow tube, this time made of silver. “This must be it,” Rhonda says. “Quick, open it up.”

“Not so fast,” somebody says. You look over your shoulder and see several police officers advancing. Leaning against the car is Percy Graves, smiling from ear to ear.

“Stay where you are,” a gruff police sergeant says. The police waste no time in frisking you and finding your fake Council IDs. One of the officers rudely rips the false moustache from your face and drops it into an evidence bag; another takes photographs of the damaged court building. The sergeant is looking at you from beneath bushy eyebrows, tapping the silver cylinder in one palm.

“So what’s this about?” the police sergeant says, finally.

“Listen to Indiana Jones here,” the sergeant laughs. “Alright, let’s have a look then. I hope it’s worth the trouble you’re in.”

The sergeant hands the tube back to you and you carefully crack open the end cap and draw out a fat sheaf of paper. Even the police crowd around, letting out low whistles.

Laid on the ground in front of you are alternative plans for the layout of Adelaide, a deed to a ship, even evidence that Colonel Light owned large properties throughout Egypt!

There are several legal documents underneath this mess. The first is a marriage annulment, dissolving a marriage between Colonel William Light and Mary Bennett. This was decided in the English courts, and took several years to arrive in South Australia. The next document is a new marriage licence, between the Colonel and one Maria Gandy.

“Look at this date,” Rhonda says. “Colonel Light was married on his deathbed. Everybody in Adelaide scorned him for keeping a mistress, but they were husband and wife at the end.”

There also appears to be one final correspondence from the Secret Society:

ARE BUT A PART OF HIS LEGACY.

THE MAN IS AT PEACE

THOUGH HE BE IN THE GROUND

Even though you haven’t uncovered the treasure, you have cleared up the stain on Colonel Light’s name.

By the time you mention Percy’s gun and how he kidnapped you both, Percy has quietly slipped away into the city. As the police turn to leave, the sergeant growls at you some wisdom about not damaging law courts in future. Yet he promises to put a call out on the radio to pick up Percy.

With your belongings returned to you, you can go through the documents at leisure – lots of material for the history books, but nothing you can actually sell for cash.

“This is nice I guess,” Rhonda says, a little disappointed. “But why did Colonel Light’s society go to all this trouble for a few pieces of paper?”

“These ’are but part of his legacy’,” you quote, and fasten on your false moustache. “There’s more out there to find, I know it. Let’s try again!”

Rhonda smiles. “This time you do all the digging.”

Curious about how the story would have ended if you’d chosen differently? Then head back to the beginning location to explore a different story path!