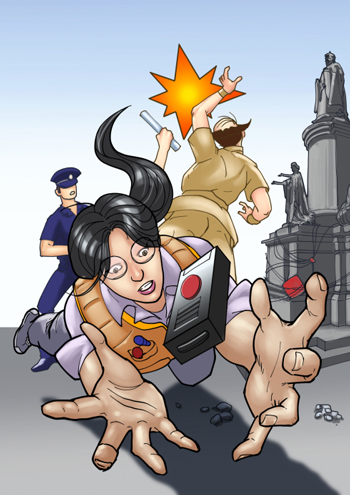 By the time you reach the statue of King Edward VII, Percy and his thugs have had several minutes head-start. You and Rhonda draw up short, horrified.

“Oh no,” Rhonda cries, and you see Percy at the impressive statue, which he’s wrapped with wires and sticks of dynamite.

“Stay back!” he cries out, holding up a remote control. “There’s a treasure in this statue, and I mean to have it.”

Rhonda steps forward. “Percy, you can’t do this. What kind of archaeologist are you?”

“The rich kind,” he laughs.

The police arrive, but all they can do is hold back the onlookers. With a cry, Rhonda launches herself at Percy, but one of his thugs snatches her before she can reach him.

“History is written by the winners, kids,” Percy says holding up the big red detonator button. “You only need to look at the past to see that when it comes to great treasures, the ends always justify a little destruction.”

“Percy, you’re about to make a huge mistake. The treasure isn’t here,” you lie. “You missed something back at the Art Gallery.” You reach into your pocket and pull out a copper tube, the first one you found at the Post Office.

Percy’s eyes narrow. You can see his suspicion fighting his greed. Eventually he strides forward and, as he reaches out, you use the tube like a weapon, hitting the hand holding the remote control. The big red button flies through the air.

Elbowing the man holding her, Rhonda dives for the detonator, catching it before it can hit the ground.

In seconds Percy and his thugs are in handcuffs, the police loading them into the back of a van. Bomb experts are called in, and they carefully remove the dynamite from around the statue.

“That was risky,” Rhonda says, a little shaken. Once you have given a statement and the police have left, you have the statue to yourselves.

You carefully work at the stones, but the base is solid. You can understand why Percy saw the need to dynamite it. Rhonda gives you a boost, and you climb up to the first level of the statue.

“The mason’s craft was long and true, for the stone of the eldest son,” Rhonda recites.

There are three figures clustered around the pillar, just below the statue of King Edward VII. The bronze women are named Peace, Justice, and South Australia. When you reach the woman named South Australia, you see that she stands with arms outstretched, the bounty of the state scattered at her feet.

Carefully searching, you find the oddest thing – Justice’s sword is actually loose! On a whim, you place it across the hands of South Australia, where it fits perfectly. The arms give under the weight, and you hear a faint click!

“Watch out!” Rhonda yells, and the whole pillar begins to turn! Holding onto the statue, you watch as a hidden doorway opens in the central pillar. When the rumbling stops, you pull out your flashlight and climb into the middle of the statue. There is a ladder, and you climb down into the base.

What you find is a miniature museum of South Australia, containing aboriginal artefacts, bushels of seed, copper ingots, piles of mouldering wool, the original flag hoisted on Proclamation Day, a branch from the Old Gum Tree. Everything the early colony made is represented here, a truly epic time capsule hidden by Colonel Light’s Secret Society. The historians will be amazed at this find, but you find nothing from the Colonel’s life before he reached South Australia.

You ponder what the strange man told you about the ‘other’ treasures, about the truth of Light’s reputation, and a treasure of gold. This may be the prize of South Australia but it’s not the Treasure of Colonel Light. It appears that your search for Light’s true treasures continues.

Curious about how the story would have ended if you’d chosen differently? Then head back to the start location to explore a different story path!