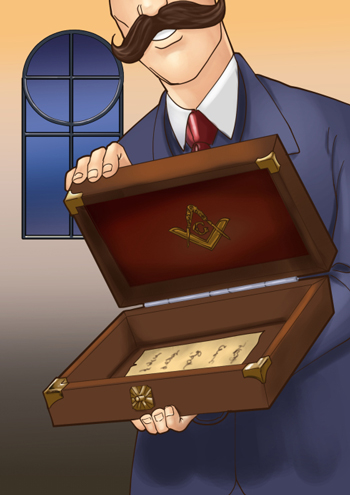 You stand before the Freemasons Hall, an enormous building of cut stone and granite. It looms overhead, brooding with secrets. Four columns flank the broad steps, and carved into the stone above the door are the three words: AUDI VIDE TACE.

“Watch, listen, be silent,” Rhonda translates from the Latin. Remembering the words ‘pillar of empire’ you start to tap on the columns, but they all look the same. Nothing has been tampered with here.

“Excuse me,” you hear someone say. “Are you here for the tour of the Lodge?”

A well-dressed man with a neat handlebar moustache greets you from the doorway. When he sees you he draws up short.

“We figured it out,” you say triumphantly. “The Mason’s craft was long and true. The pillar of empire.”

“No, no, no,” the strange man says. “That particular treasure was in the statue. Though yes, there’s more than one treasure.”

“But the pillars?” you say.

“There are two main pillars in Freemasonry, named Boaz and Jachin. They stand for ‘Strength’ and ‘Founding’ or establishment. Not empire.”

“Then I guess we’ll go back to the statue,” you say. At that moment there is a terrific explosion, further down North Terrace. You see a fireball plume up into the air, roughly where the statue of King Edward VII is.

“You’d best wait here,” the man says, and disappears inside, closing the doors behind him. Seconds later you hear the wail of sirens, and police cars and ambulances scream past. The man reappears with an old wooden box, and you can see that he is shaken.

“It was never meant to be like this. This was a search for curious minds, not…not violent criminals,” he says.

The tour-guide opens the old case. On the lid it reads OCCULTA SOCIETAS LUCI.

“The Secret Society Of Light,” he explains. Within the box are scribbled plans, documents written in code, pages of names.

“Colonel Light was a member of the first lodge here,” the man says. “When he was dying, he wanted to preserve his legacy, for a time when people would look more kindly upon his works. So we formed a secret society within a secret society, a select group of Freemasons tasked with keeping Light’s treasures.”

He allows you to look at the clues, which are incredibly cryptic. The most promising clues include references to SEEK THE MARKER ABOVE THE GOOD MAN, and LOOK FOR THE LAW OF A DISTANT LAND. Rhonda starts to write the codes down, but the man seizes her pen.

“No! A villainous soul can take the clues from you as easily as they can force it from me. No writing, only your memory.”

You do your best to absorb the information, but much of it is in cipher or riddle. It is impossible to tell which clues point to the treasures and which are dead-ends intended to mislead.

He forces you to put the old papers into a wastepaper basket and, to your shock, he drops a lit match into the bin. In seconds the secrets are ablaze, and countless clues lost.

“Our ancestors made a most solemn vow to serve the Colonel, and we continue to do so. Now that a violent man wreaks havoc across our city, these secrets must be kept.”

He heads back into the Lodge building, drawing the doors shut behind him. Rhonda is still stunned from the destruction of the valuable documents, and you feel a little bit angry.

It looks like you have to go back to square one. Time to try again.

Bad Luck! Curious about how the story would have ended if you’d chosen differently? Then head back to the start location to explore a different story path!