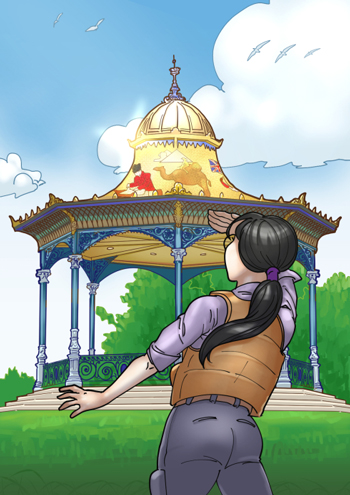 You cross the lawns of Elder Park, smiling at the sight. People ride and jog alongside the River Torrens, and others have hired the paddleboats to ride around on. The tourist boat ‘Popeye’ chugs along the river, filled with happy faces. Looking around, you see the Festival Theatre, the new Adelaide Oval, and the fancy footbridge leading from the train station.

This is everything that sums up Adelaide and South Australia, all in one glorious spot. You get to work looking over the Rotunda, but nothing above ground looks like a clue.

“Apparently you have to stand in the centre of the Rotunda and clap,” Rhonda says, and does so. The sound-shell echoes marvellously, a testament to the Rotunda’s purposes as a bandstand.

“The Elder gave a rotund gift,” you read, going over the clue. A quick search on your phone reveals that Sir Thomas Elder commissioned the Rotunda during the early days of the colony, a gift for the colonists at his own expense.

“Sir Thomas Elder basically got filthy rich in South Australia,” Rhonda says. “But unlike most entrepreneurs, he poured massive amounts of money back into the fledgling state. This rotunda, huge bequests to the Art Gallery, endowment funds for the university. He funded most of the early exploration attempts into the interior of Australia.”

“So why did the Secret Society send us here?” you ponder. Poking over the base of the Rotunda, you suddenly realise something.

Thomas Elder didn’t commission the base of the Rotunda! He only sent over the roof of the building, and the supporting pillars. The rest was built to install the Rotunda. Elder’s gift sits above you!

Excited, you start to search the pillars, and Rhonda gives you a boost to search the ceiling. In the centre of the roof, an old light fitting moves beneath your touch. Twisting it loose, you find a message tube, this one in pure gold. Hands trembling, you open it up.

The parchment is creamy white, and has kept well over the years. Rather than a strange riddle, it’s a short note.

To The Hunter of Light’s Treasures,

Be it known that I am a member of Colonel Light’s Secret Society, and have erected this structure in his honour. The poor man died in infamy, but his legacy has benefited many. I would not have the wealth and success I have today without his efforts for the colony of South Australia.

Accordingly, my true tribute to the great man lies dormant, till an age when he can be appreciated. Look you beneath the zinc cladding, and let his name be respected in your future age. Your search for his treasures continues, but my part in his story is now done.

It’s a knee-trembling climb up onto the roof of the Rotunda, but you make it, claw-hammer clutched between your teeth. Carefully, you peel up one edge of the old zinc cladding, and gasp.

You madly peel everything back. Somebody thinks to call the police, but when they see what you’ve found they too stand gobsmacked. The police set up a cordon and let you continue. Once you’ve cast aside the false cover of the Rotunda, what’s left is breathtaking.

The roof is a huge mosaic-work that stretches right around. There are images of Light bent over survey tools, as the captain of a Royal Navy vessel, and a heroic soldier fighting Napoleon. His legacy is writ large against the city sky-scape, and cannot be denied any longer.

“How wonderfully generous,” Rhonda says as you both marvel at the find. You may be back at square one, but there is a skip in your step as you head off to continue your search for Light’s treasure!

Curious about how the story would have ended if you’d chosen differently? Then head back to the start location to explore a different story path!