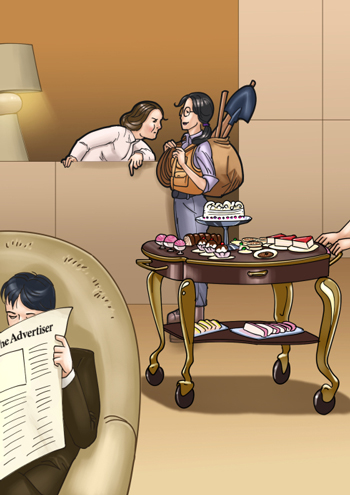 Stepping through crowds of shoppers and tourists, you cross over the busy Hindley Street intersection, and walk up to the Mayfair Hotel. It’s a luxurious conversion of the old Colonial Mutual Life Building, and you can still see the letter CMLCML across the front of the stonework.

Rhonda gets a phone call when you arrive, and as she listens, her smile spreads wider. After she hangs up, she has to gather herself for a moment before she can talk.

“Percy and his thugs went to the Britannia roundabout,” she says. “They dug everything up, and I guess they forgot to Dial Before You Dig. They hit a sewage pipe! The police are there right now, arresting everyone. The whole crew are up to their ankles in it!”

The vision of that nasty man covered in filth makes you laugh, and the knowledge that he’s been arrested lifts your spirits.

You begin your search of the Mayfair Hotel. There’s nothing like a corner stone, or anything to indicate where you should dig. Concerned at your dusty appearance, a concierge appears, looking at Rhonda’s digging equipment with alarm.

“Are you looking for a room?” she asks, and you shake your head.

“We’re looking for a secret treasure. We think it might be buried in this hotel.”

“Oh, no, no, no. We’ve already let dozens of archaeologists poke through here while we did the renovations. It’s a firm ‘no’. You cannot conduct a dig on the premises.”

Moments ago you were walking on sunshine, but you feel instantly deflated at these words. Rhonda sets all of her digging equipment to the footpath with a long sigh.

“You mention previous digs,” you say, grasping for hope. “Has anyone ever found anything that looks like this?” You pull one of the copper message tubes from your pocket and hand it to her.

The concierge rolls it around in her hand and then obviously has an epiphany. “Actually yes! The manager laid claim to it and has it displayed in their office. It shouldn’t be a problem to show you!”

Yet when she returns with the item, your heart sinks even further.

The message tube looks like it’s spent 100 years soaking in water. It’s completely corroded, rusted through in places. One lid has completely seized shut, and someone has prised open the other end with a pair of pliers.

You carefully extract the contents with a set of tweezers, and Rhonda shakes her head. Almost nothing is left of the old parchment and the ink has long since faded away. Even though Percy has been captured, in the end you have been defeated by time itself.

“Well, I guess we can’t win ‘em all,” Rhonda says with a sad smile. She hails a taxi for the airport, and you wave goodbye from the footpath. You didn’t have the heart to tell her, but you don’t even have enough money in your pocket for the bus ride home.

Bad Luck! Curious about how the story would have ended if you’d chosen differently? Then head back to the start location to explore a different story path!