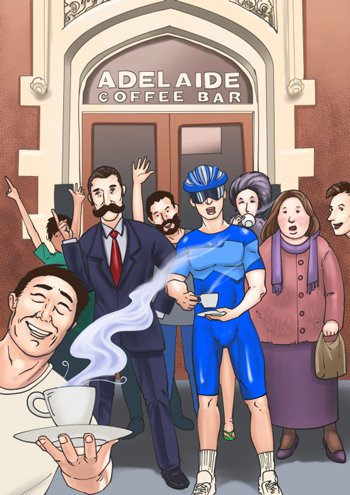 You reach the busy coffee shop once known as the British and Foreign Bible Society. It’s built in red terracotta brick with a bluestone base and stucco dressings, complete with a pair of lancet windows with leadlights. Considering it was a secular building at the time, it’s strangely gothic, almost like a miniature place of worship.

The patrons look at you like you’re mad as you poke around the front of the building, looking for the foundation stone. You hear someone laugh, and tell their friends you must be on a scavenger hunt.

“It’s down the side,” Rhonda calls.

Ducking around the corner, you see two old foundation stones in the side of the building. The lowest one seems to be the oldest, commemorating the building’s opening.

You both get to work, carefully chipping around the stone. The coffee shop owner comes out to see what’s going on, and when you quietly mention that you are hunting for a treasure – on behalf of the Council, of course – he is soon handing out hot drinks to you and the gathering crowd.

“The Society’s Good Word must refer to the British and Foreign Bible Society,” Rhonda lectures you and the crowd. “They arranged for bibles to be distributed, and translated into dozens of languages. They weren’t here too long after Colonel Light was, 1845. Who knows if someone here spoke with Light before he died?”

You try to remember everything you’ve learnt about Colonel Light. As he lay dying, he had few friends in the fledgling city. He was still married yet lived with another woman, in an age where divorce was almost unheard of. He’d placed the city of Adelaide here, to almost universal objection, and ended up hounded out of his job, stressed, broke and finally dying of tuberculosis. Perhaps this Bible Society had been true to their religious convictions, and swore to help a neighbour in need.

To keep Light’s secrets for a day when others would be willing to hear them.

You have no shortage of willing helpers as you drag the stone loose. Shining into the hollow with your flashlight, you find another copper cylinder, and you twist the cap open to find another yellowed page.

IN A PLACE WHERE IDEAS MEET

TRY YOU THE RIGHT-HAND PILLAR

WHERE THE CLASSICS TOUCH THE STREET

“It’s the Art Gallery!” a well-dressed man with a handlebar moustache immediately shouts from the crowd.

Suddenly everyone is shouting their own ideas, a deafening gabble of caffeine and excitement. It’s then that you spot a familiar face in the crowd. It’s Percy! He smiles at you – he’s heard everything.

With a sly wink, he’s gone and, once again, he’s one step ahead.

“Damn!” Rhonda says. “We should have told the shop owner we were checking for salt damp rather than starting this ruckus.”

You’ll have to act quickly.

Art Gallery of South Australia [North Terrace]: Side with Mr Handlebar Moustache and decide to visit the premier place of painted pictures, the Art Gallery on North Terrace? Head west to Gawler Place then turn right and follow this north to reach North Terrace. Head east and the Gallery is on the north side of the road.