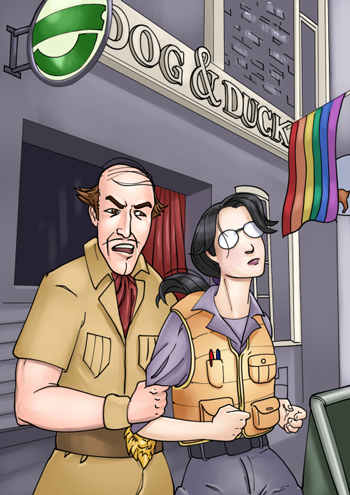 The Dog And Duck Hotel (Formerly The Royal Admiral Hotel)

Percy herds you towards the front of the Dog and Duck Hotel. You consider making a run for it, but he has a firm grip on Rhonda’s elbow. She looks terrified.

“You’re not brutal enough to be in the treasure game, Rhonda,” Percy says. “You never were.”

He looks at you and sneers. “You chose the wrong partner.”

When a group of people approach you on the footpath, he quietly pockets his gun, but you both know that it’s there. You’re still his prisoners.

“No funny business, now get searching.”

The original stonework has been extensively plastered over and repainted and you find it hard to picture what the original building must have looked like.

“That last clue says ‘your next stage is to seek out an arch…’” Rhonda says.

You look up, half thinking of escape plans, and see that the entrance to the hotel has a large stone arch above it! Unfortunately Percy’s gaze follows your own. He tightens his grip on Rhonda’s arm, and you get his meaning.

Dragging over a hotel chair, you take down the hotel sign and chip through render and paint, until you reach the keystone at the top of the archway.

“What are you doing?” the pub owner asks, coming out to see what all the noise is.

“Oh. Okay then,” the man says reluctantly, and disappears back into the hotel. You curse yourself for not warning the man in some clever fashion, like you would have been able to if this were a story or a movie.

With the mortar gone, the keystone slides out with almost no effort, and you reach into a hole behind it.

“Got it!” you say, hauling out another copper cylinder. Percy steps forward, and holds his hand out. The idea comes to you in a flash! You intentionally fumble the cylinder so that it drops to the footpath. When Percy stoops to pick it up, you throw yourself off the chair, and knock him over. Rhonda tries to run, but he grabs her ankle, hauling her to the ground.

“Next time you try something, I’ll shoot you,” Percy snarls.

With shaking hands, you take the cylinder that Percy shoves in your stomach, and carefully pluck out the parchment at gunpoint.

TO TAKE IN THE ORIGINAL PLAN,

SEEK THE MARKER ABOVE THE GOOD MAN

TO SQUARE COLONEL LIGHT WITH THE PEOPLE

SEEK OUT THE ORIGINAL STEEPLE

“Ha!” Percy laughs. “To square Colonel Light with the people…the treasure must be in Light Square. It was named after him when the city was laid out, and there’s a monument to him there.”

“I heard he was buried there,” you say. “Are you digging up bodies now?”

“I’ll do whatever needs to be done,” Percy says coldly.

“What if you’re wrong?” you reply. “What about the original steeple? If you want this treasure, I think we need to look at the Holy Trinity Anglican Church – oldest church in Adelaide.”

“There’s no ‘we’, pip-squeak, and don’t you forget it,” Percy says. Still, he pulls out the last clue, and frowns in concentration. You spy a bunch of Hindley Street revellers approaching.

“Get ready,” you whisper to Rhonda, and then you slip into the group, losing yourself in their numbers. Percy realises and shouts, but he doesn’t dare take out the pistol. Yet as you turn, your heart sinks. Percy has Rhonda by the elbow once again. She didn’t get away!

Percy’s almost certainly going to Light Square with Rhonda as his prisoner, but then you realise it’s the perfect distraction. While he’s there, you can search the Holy Trinity Anglican Church for the real treasure.

Do you try to help her escape, or trust she stayed with Percy for a reason? You’ve only got moments to make your decision.

Light Square [Light Square]: Charge over to Light Square? You can’t leave Rhonda in the hands of that villain, even if it means missing out on the treasure! Head west along Hindley Street until you reach Morphett Street. Turn left to reach Light Square and look for the monument at its centre.