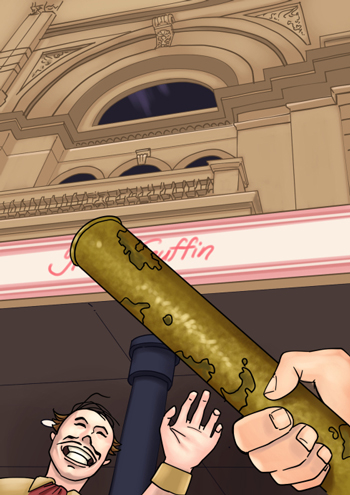 Percy herds you to the front of Her Majesty’s Theatre, a majestic old building still in use today. When he is sure you can’t run for safety he puts the pistol into his pocket.

“Well…get looking then,” he orders.

The façade of the building is grand, a suggestion of the theatre-stage within. There is a balcony surrounded by a balustrade, and two-dozen beautiful windows, in rows of arches, rectangles and squares.

You pace around in front of the building, but there is nothing that looks like a loose brick, and Rhonda cannot find the tell-tale mortar on the foundation stone.

“Your next stage is to seek out the arch,” Rhonda mumbles, looking over the clue. “It could be the proscenium arch in the theatre itself, above the stage.”

“Maybe it’s the arch there, above the balcony,” you say. You both crane your heads, and you can see an external arch above the verandah, and sure enough it has a conspicuous green keystone between the words ‘Majesty’s’ and ‘Theatre’.

“Only one way to find out – get up there,” Percy growls. “No funny business. I’ll shoot first and ask questions later.”

He bangs on the door for a minute, until someone arrives. It’s the caretaker of the theatre, and he shakes his head when you ask to get up there.

“I won’t have it,” the caretaker says. “This building has been standing since 1913, and has survived two world wars, the depression, and dozens of idiots with spray cans. You’re not touching my theatre!”

You look at Rhonda, and she glances at Percy. He’s starting to go red, and his hand reaches towards the pistol in his pocket.

“Is there anything else we can look at? That may have been removed or collected from the walls,” you ask desperately.

He comes back a few minutes later with a large box. It’s full of curios, including some dusty props, old glass bottles, and a moth-eaten copy of the works of Shakespeare.

“This is all the old stuff we’ve found in the walls over the years during renovations. There might be something in here. I’ll leave you to it.”

You sit on the footpath and sort through the box. When you find another copper tube, you snatch it up.

“Give me that!” Percy says, and thinking fast you sock him across the head with the metal tube. He falls onto the footpath, groggy, and you and Rhonda leap on top of him. Reaching into the box, you find an old belt, and you manage to hog-tie him.

“You’re making a big mistake,” he yells. You pull the gun out of his pocket and slide it across the footpath, well out of his reach. The next time he opens his mouth you jam an old silk handkerchief into it.

You both scan the next clue, even while Percy bucks around on the ground.

TO HOLD LIGHT’S BURDEN IN YOUR HAND

LOOK FOR THE LAW OF A DISTANT LAND

WHICH CORNER BEARS A HEAVIER WEIGHT?

IS IT THE POPE OR IS IT THE STATE?

“Burden?” you whisper. “I thought we’re after a treasure.”

You move away from Percy to look at Rhonda’s map. “There are a number of courts nearby, but it makes sense to go with the highest authority in the land: The Supreme Court. It started out using all the existing laws from England, so that would be the law of a distant land.”

“However, a distant land could also mean Rome,” Rhonda says. “There might be something hidden in St Francis Xavier Cathedral. Both of these buildings are on corners too.”

Behind you the theatre caretaker opens the front door, a tray of drinks in his hand. He takes one look at the trussed up Percy and the gun on the footpath, and drops the drinks, running for the phone. There’s no time to explain yourself, you’re going to have to run for it!

Supreme Court Building [Cnr King William/Gouger]: Trust that the law of the land is the Supreme Court? Head east along Grote Street until you reach Victoria Square. Turn right and head south until you cross over Gouger St to arrive at your destination.