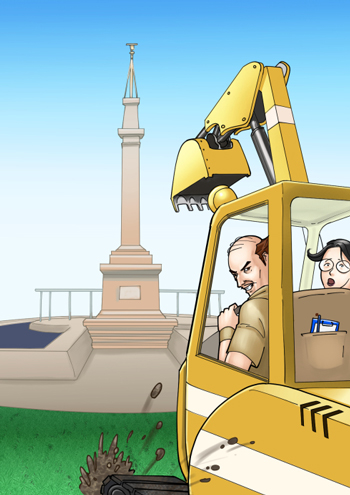 You follow Percy and Rhonda to Light Square. You consider ringing the police, but you’re breaking the law just as much as he is. It’s up to you to save the day, and your friend.

At Light Square you come upon a scene of destruction. Already Percy Graves has a construction crew onsite, tearing up the ground with earth-moving equipment. Clearly they’re about finding Colonel William Light’s loot, and fast.

As for Percy, he is now behind the controls of a huge excavator; Rhonda is tied up on the seat next to him. He’s headed straight for the monumental obelisk that marks Colonel Light’s burial place.

You run across the lawns, dodging workmen and digging machines, and before you can think about it you’re standing in the way of the yellow excavator, waving your arms and screaming at him to stop!

“Rhonda, tell your little friend to step aside,” Percy yells. “You should know better than anyone that I always get what I want.”

He revs the engine, lifting the digger arm up higher, and higher. In a moment, he will bring it down on the monument, and send everything crashing to the ground.

“You’re not going to get away with this,” you shout over the noise. “Listen! The police are coming and you’ll pay for this.”

Percy cackles. “Let them come. I’ll be out of here soon, with you both left to take the fall for me!”

Yet despite his confidence Percy looks around for just a moment, and you leap up, grabbing onto the side of the obelisk. You clamber to the top, and soon you are clutching at the golden surveying tripod. Face twisted in anger, Percy drives the excavator forward, and bangs the steel bucket up against the stonework.

Everything wobbles. He drives forward again, digger arm raised high. He is going to sweep you off the top of the monument! The sharp-toothed bucket gets closer…

Then you hear a struggle below, and the excavator spins. Rhonda has wriggled out of her bonds, and is fighting with Percy.

Sirens fill the square. The police pull Rhonda and Percy apart – but not before Rhonda lands one final blow that leaves her adversary seeing stars.

Too frightened to climb down from the precarious monument, you clutch the ornamental tripod and wait for a fire-fighter’s ladder. You look more closely at what you’re leaning on.

“Oh my god,” you say. Up close you can see that the sighting instrument is in fact a gold cylinder, a much larger version of the message-tubes you’ve been finding. The golden legs of the tripod resemble a steeple, and this is the marker above the good man! The treasure was never buried with Colonel Light, it was above him, hiding in plain sight!

Very carefully you pull it free, and when you are safely on the ground you unscrew the cap. You pull out a long package wrapped in canvas, tied up with string. Cutting it open, you marvel at the wonders.

A solid gold statuette of an Egyptian cat god, marked with hieroglyphics. The complete set of Colonel Light’s war medals. Letters of thanks from the Pasha of Egypt. An alternate set of plans for Adelaide, laid out like Manhattan with only one giant park in the centre of the city. Lost pieces of Light’s artwork, curled into a tight scroll.

“These are amazing,” Rhonda says. You look down on the treasure with elation, but then you catch a glimpse of Percy’s sneering and hateful face through the window of the police car.

“Do we really want to be like him?” you say.

Rhonda smiles. “Sometimes the adventure is reward enough. Cheer up! I have a couple people you should meet.”

Rhonda disappears to make a phone call and in a few minutes two people are striding across the square towards you. The first introduces himself as a curator of the South Australian Museum. He takes the bundle of treasure reverently from your hands; they can’t afford to pay you for the treasures you’ve found, but they promise to list your name by the exhibition pieces. And, just like that, you’ve donated Colonel Light’s treasure to the museum.

Rhonda steps in to personally introduce the second visitor, a women in a blouse and slacks, with her hair up in a librarian bun. “This is Professor Pollock.”

The professor beams at you. “Rhonda has told me what fine work you did uncovering Colonel Light’s treasure. I’m heading to Turkey very soon on a dig; we are on the verge of uncovering a prince’s lost tomb…I’d like you to come with me.”

Smiling at Rhonda, you accept the job. Sometimes the adventure is reward enough!

This is the end of your adventure but you can head back to the starting point to explore a different story path, or you can click the ‘Stop’ button below to head back to the menu and try one of the other Story City adventures!