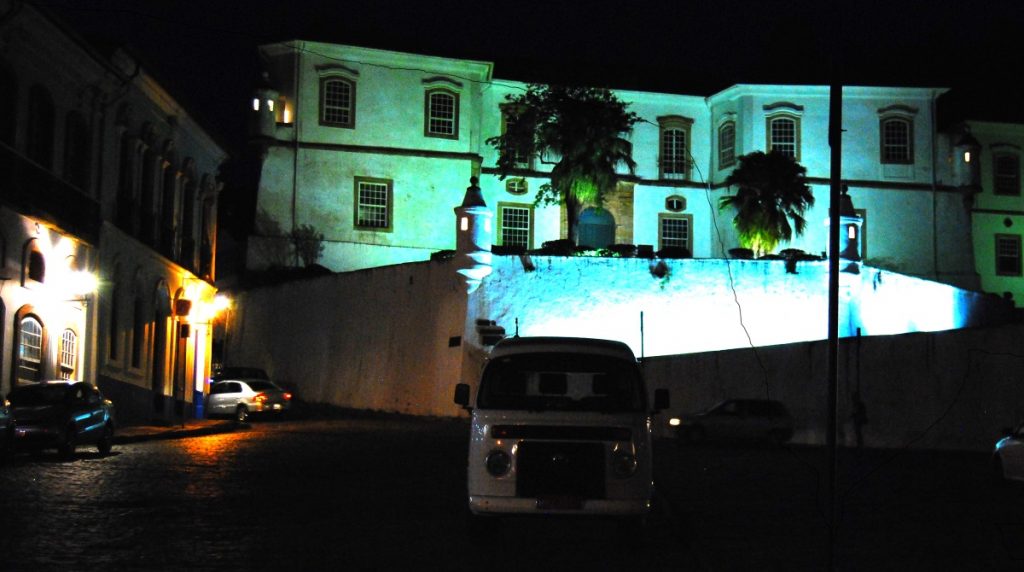 Originally the Palace of the Governors, it was erected in 1741 by Aleijadinho’s father. Aleijadinho was one of Brazil’s most famous artists, and you’ll hear more about him in the next stop. The School of Mines was not founded in this building until 1876, and is currently part of the Federal University of Ouro Preto, a university that is known for the training of mining engineers and geologists. At the back of the building is an astronomical observatory created in the early 20th century, and is one of the oldest in the country. In the museum section of this building you can see about 20,000 samples of rocks and minerals from all over the world, presented in a room that is designed to look like the interior of a gold mine. Ouro Preto was famous for its black gold, in fact, that’s what the name Ouro Preto translates to.

“It’s called black gold because the gold that they first found was covered by iron, and the iron is black, you know? And so, when they scratch it, they could see there was gold there. That’s what they say.”

The main street of mines is the one that runs parallel to the road where you can find Marcelo’s, Chico Preto Hostel, if you’d like to check it out at the end of this tour. But if not, Marcelo takes us now into a brief story of those deep caverns.

“The parallel street, Santa Rita, there are many mines, [they] have very ancient mines of the oldest there, no? And those mines, I don’t know if you’ve been there, they are very peculiar as well, because they are small. Ouro Preto has like 300 kilometres of mines underneath the town. Some are not even discovered, had [been] discovered yet, you know? Once in a while, someone will go, ‘Oh! I found a mine in my backyard yard’. And there’s just a recent one in Antonio Dias, they start now…

And those mines if you go inside you see the tunnels are very small tunnels, because the black people, no, the buntos, who were the diggers, no? As a matter of fact, they were like engineers, no, they have the knowledge, that they knew how to keep following the veil.”

“And they knew how to dig, you know, how to use the tools. And if you see the tunnels, you won’t believe that they carved the whole… they dig it all… they dig it all inside the mountain with, that… just with the hammer, no? And yes, the chisel. Amazing, amazing. And they were small people. Those bunto people, no? And also children, a lot of children were used to work in the mines.”

In our next stop, we are going slightly down the hill on the opposite side of town to the Igreja de São Francisco Assis church, which is opposite the handicraft market, where one of Brazil’s greatest artists did his work. Go to the main street that bisects the square between the statue and Museum da Inconfidência and go left down, Cláudio Manoel Street. You should see the markets on you right, and the church just beyond.