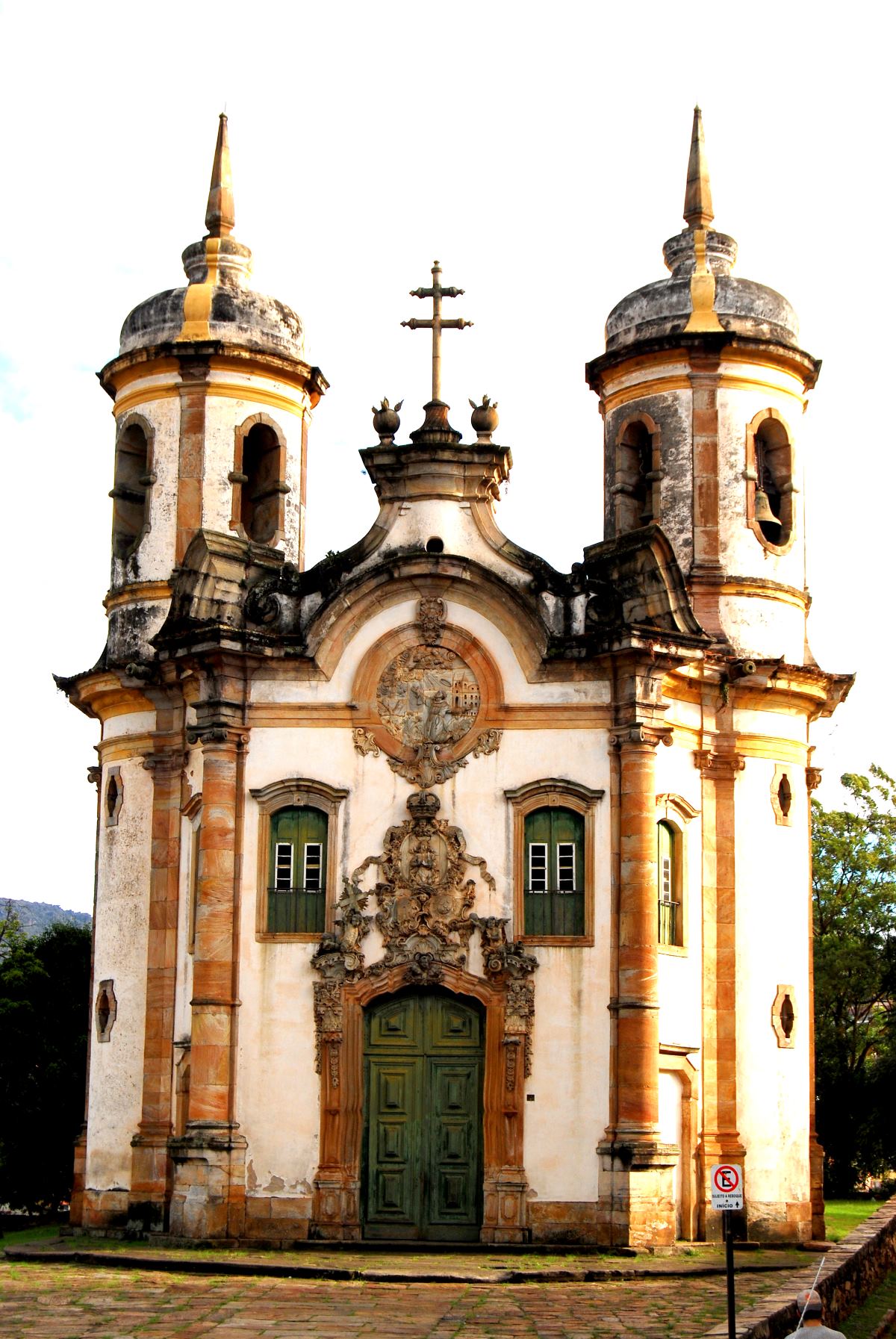 Igreja de São Francisco de Assis, is a Baroque style church with Rococo decorative elements, and is one of the most celebrated creations of Aleijadinho, who was a combination of mason, architect and sculptor. He created the entirety of the façade before you out of soapstone, which the crafts people in the market behind you also use. According to some analysts, the whole façade refers to the crusades war, and you can see examples of cannon shaped pipes, and the two-armed cross surrounded by two pump-shaped balls.

What Marcelo truly loves about this church, is the paintings on the roof.

“I know quite well who did the paintings of the church in San Francisco, that one made by Aleijadinho because he was master [indecipherable], you know?”

Chico Rei, the African king, whose mine is very close to here, one you can visit if you’d like, ordered the creation of this church. It was he who contracted the famous artist.

“He contracted this Aleijadinho to make this church, you know? Aleijadinho, this guy was the most important artist, Brazilian artist so far. He is our Hodan, he is amazing… artist. You see if you go to the church, you’re going to see he had advanced technique in terms of perspective, no? So, like three dimensional things, it’s very interesting. That the San Francisco church you look at the roof, go there, and then there is a lamp [lamb?] over the cross. And you keep walking and you go to the end of the naive of the church. And this lamp [lamb?] is under the… not the tree… under the cross instead of up the cross it’s under the cross. It’s something with painting, you know, very interesting. It’s a visual effect, and there are many visual effects there.

[Note: We believe that Marcelo may have gotten the wrong church here for this visual effect, which has been mentioned in several guide books as being in Pilar Church]

The free men never would sign, nor white man because it was not a profession for white man to be a sculpture. No, this was not a white man profession. The mix of white and black was not recognized so he could not sign as well. So, there is no signature[s] [at all]. And the way they did it is with impressive marks of their own.”

So, the crews of painters and sculptors, all African, or all mixed race, or slaves, were not allowed to sign their work. So instead, they gave their work symbols or signature features which would then become attributed to them.

“You see some of the angels they put like a Negro face, you know, a black face, or face of this master [Ataied?]. Some [statue of] St John at the Church of Maryanna, you see is a bit gay, no? With the little breasts because he [the sculpture] was a gay guy. So, at that time was something very difficult. That’s… They say that his sign is a masterpiece, no, with this figure. That is a little bit… cannot see if it is a man, [if] it’s a woman…”

The master, Aleijadinho, as Marcelo mentioned, was a mixed raced man and he was also a cripple as were several of the slave artists under his command.

“They made examination their bones and discovered that they had Poferiese [?], poferiese [?] is something with bones, but also he had leprosy or syphilis. I don’t know which one. Anyhow, he became losing the fingers, the extremity of the body, and then they attached the tools in his arms, no? And he carved with, like, that, no? The master, helped by their company, no, his company, he had like, six slaves worked with him for many years… like a school, no? He made a school.”

Our next location is a short way-stop on the way to location eight, which involves robberies and gold heists. To get to our next way-stop, the Igreja de Nossa Senhora da Conceição, take São Francisco de Assis Street which curves around behind the handicraft markets, away from the church. Go through the first intersection, then take the next right, down Do Aleijadinho Road. The church is down the road on your left, with a little park in front.