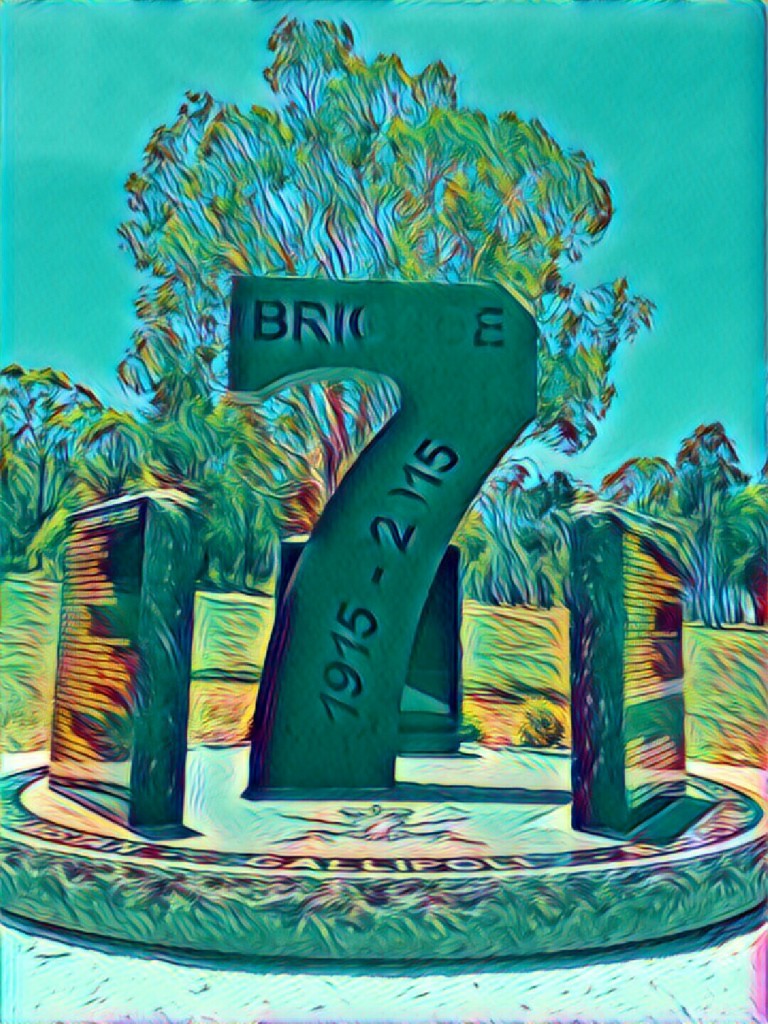 Imagine you’re small. No, smaller. Very, very, small. There are many animals and insects and plants and flowers and trees in the park. To see the creatures in this story up close you need to be small as can be. Are you small as can be? Good.

I want to introduce you to three Viros, (from the word ’Vironmentians, which is what they are). They’ve come to the park to see the new memorial. Mulberry Wild, Midyim Berry Rumblethorn and Gum Nutter think it might be the biggest number 7 they’ve ever seen. They’re pretty nervous of Huge-mans and don’t normally come out in the day, but you’re lucky I guess.

You might have seen a Viro before. Out of the corner of your eye, thinking it’s a trick of the light. They’re usually named after what they look most like.

Look closely (you don’t need to squint). Gum Nutter looks as if he’s fallen out of a very tall gum tree. His knuckles look like gum nuts, his hat is made of gum nuts and his arms and legs are like Mallee tree twigs. Mul looks like a Mulberry. She has a long face, rosy cheeks and an elegant, juicy head on strong thin limbs. She’s wearing a hat made from dried petals of a Frangipani blossom. Something would try to eat her otherwise. Huge-mans, birds, every creature in the park likes Mulberries. You can put them in Jam and Fruit Crumbles and they’re real nice with ice cream too. Mmm, delicious.

In comparison, Midyim Berry looks completely miserable. “I’m sooooo bored.” He says. “Why do I need to wear this stupid flowery hat?” He fidgets and scuffs a shiny green leaf shoe in the dirt. The petals of his hat are quivering.

A midnight coloured Crow caw-caws. Its wings beat a steady swish. From the trees above the giant climbing frame, you and the Viros follow its shiny progress over the cricket pitch where it wheels toward the track marked like roads for rolling Ferris wheels and the Eucalypt Grove beyond.

“I-I-i-i-i-Is it gone?” Midge says in a muffled voice. He’s lying really still, face down on the floor, with his hands over his head.

“What are you doing down there?” Gum asks.

“Of course not. We’re in the open.” Mul pauses and frowns. “Wait a minute. Were you hiding?”

“No way! Definitely not hiding. Come down here and have a look. Fascinating stuff.” Voice trembling, Midge adds, “I didn’t even see a Crow. Was there a crow?”

Crouching beside him, Mul says, “It’s okay to be frightened you know. The park is a dangerous place for us.”

It’s true, the park can a hard place for Viros: Huge-mans and their barkers stamping around; enormous contraptions rolling around on Ferris wheels (what you call bicycles); Fire Ants with their burning bite; and those pesky Weed Feet, taking all the good nutrients for themselves, hogging the sunlight and soaking up all the water.

Just then, a strange honk rattles your ears. Large flapping wings blow you and Gum off your feet. A long curving black bill scoops Midge and Mul up and the Ibis carries them up and over the sign that says, Mountains to the Mangroves Corridor. Midge’s squeals are already growing distant.

“Hey you, come back with my friends!” Gum shouts. He races between the sign’s posts, pausing long enough to see the big bird head towards a white rectangle sign about 100 Huge-man steps away. There’s some skyscraper tall grass around it. C’mon. Let’s go!