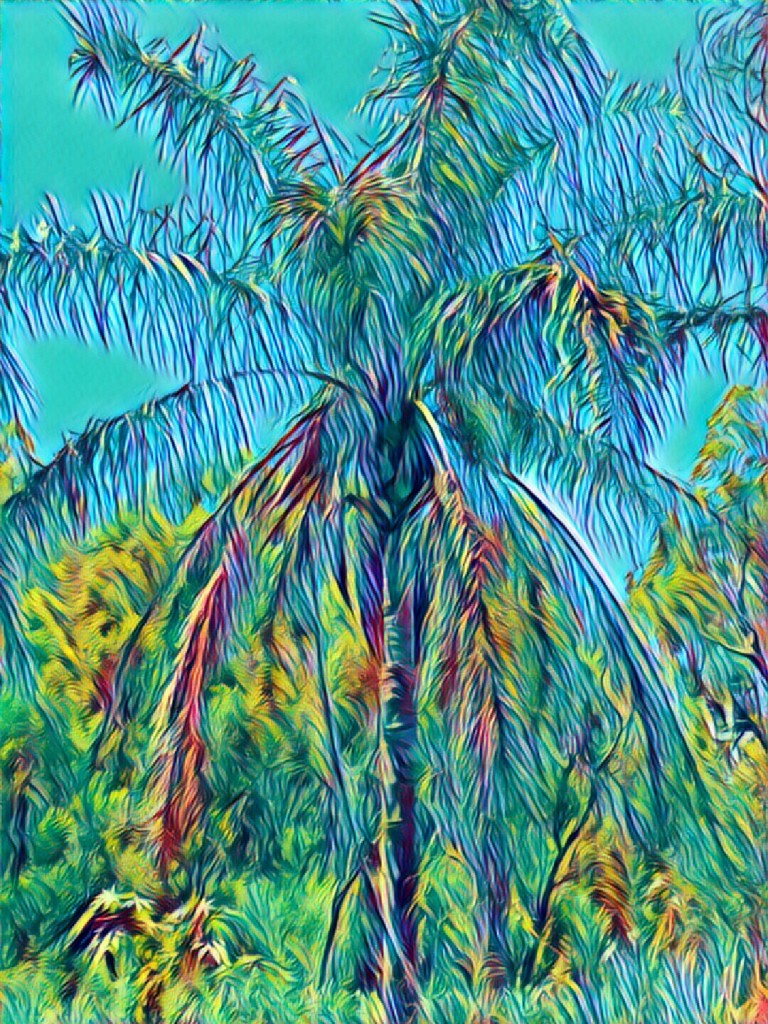 Can you see the big old, solitary, Alexandra Palm Tree on the creek bank? Gum’s checking himself over for Cobbler’s Pegs. Can you help him? Check your sleeves and socks too. They’re sneaky devils.

An Ibis, having a half-hearted peck, emerges from the brush on the creek bank. Gum stops and shouts, “Oi. You! Ibis.” He marches towards the large white bird.

“Do you mean me?” The bird looks surprised and looks behind himself. There’s nothing there.

“Who do you think I was talking to?”

“That’s not very nice,” the Ibis says. His voice is low and sombre.

“You swooped off with my friends!”

The Ibis shifts from foot to foot. “Sorry about that. I thought they were sticks.”

“You expect me to believe that?”

“Don’t matter if you don’t or do.” Ignoring Gum, the Ibis turns and bows to you, and says, “Name’s Fred. Pleased to meet you.”

Go on. Tell him your name.

“Where are my friends?” Gum snaps.

The Ibis drops his head. “I’m afraid they’ve passed on to greener pastures.”

“What!?” Gum shouts. “They were my closest friends!”

“They went over that bridge there.” Unfolding a wing toward the small concrete bridge, Fred says, “Up the slope toward the square green sign.”

Fred stretches his wings and tucks them in. “To find a nice Ibis to love, I need a fresh stick. If she likes it, we’ll go off and use it to build a nest together.” A tear forms in Fred’s eye. “I’d really like someone to build a nest with.”

“That’d be brilliant!” Fred looks so much happier. Gum softens too. Can you find some good sticks for Fred? Not too long. Add them to your leaf whistle.

Gum holds up a two pliable fronds from a palm leaf. “You could give her these. To put the eggs on?”

“You could say that,” Gum says and smiles. He looks at you, “C’mon, we might be able to catch up with Mul and Midge at the square green sign.”

“If you find yourselves with wood under those things you creatures call feet, you’re on the wrong bridge. And watch out for the Weed Feet on the railing,” Fred says. “They might look beautiful, but don’t be fooled. They’re happiest when they’re blue.”

Around 2 minutes – 200m walk along the path toward the t-junction with the path back to the 7th Brigade Memorial where the square green sign is placed.