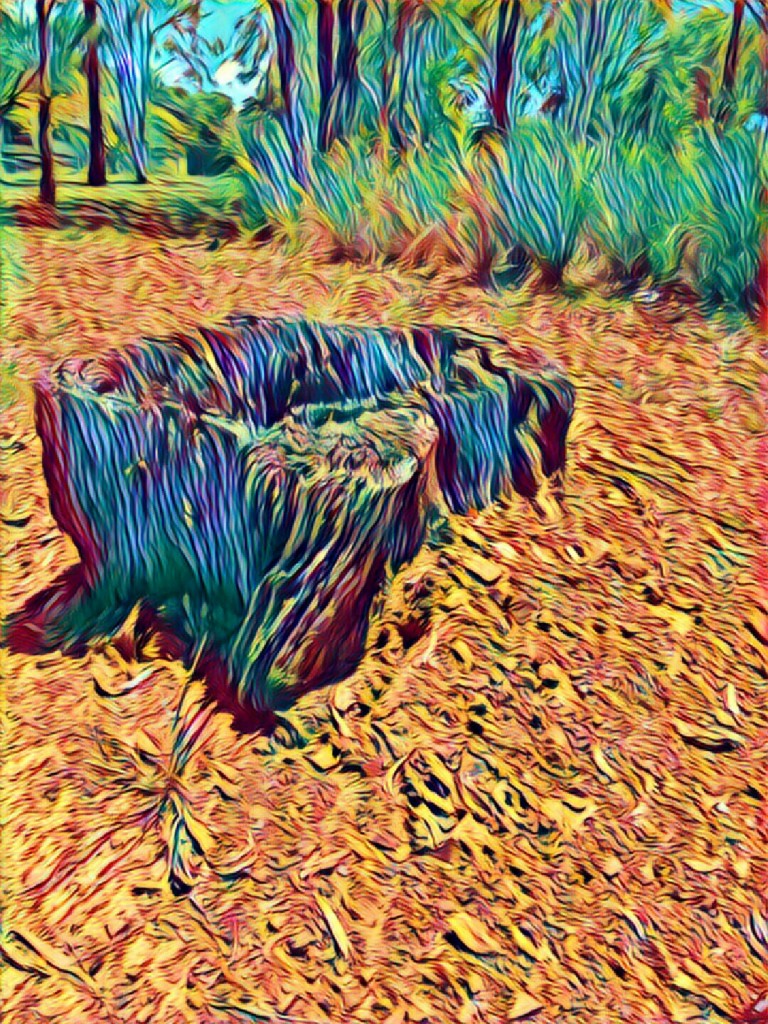 “Keep up,” the Wagtail chirps. “Does slow motion ever get dull?” She weaves through the trees, lands on the rim of the wizened tree stump. “One of your friends is stuck. In there.” With two flicks of her tail, she darts away.

Gum puts a bumpy finger to his lips and steps softly toward the tree stump.

Can you hear a Viro voice?

At the top of the stump, Gum shouts, “Mul!!” His grin is like a beam. He looks down at you and raises a gnarly thumb. “She’s okay. Get up here,” he shouts.

You climb the crumbling stump. It smells like old wood and mushrooms. Some of it breaks in your hand. From the top, you see Mul wave and grin.

You hang a leg over either side of the thick rim. You grab his waist, and then his ankles as he hangs further and further over. He and Mul grab each other’s hands so she can put a foot on the hollowed trunk and walk up the side. When she reaches Gum, she uses his knotty frame as a ladder and pulls herself to the lip. You let go of Gum’s ankle with one hand and grab her with the other. Gum swings a little and makes an ‘Eeek!’

“You sound like a siren.” You’re laughing. “Stop making that noise.” You help Mul until she’s sitting on the other side of Gum’s waist. You both tug. He rises up faster than expected and you all tumble in a bundle onto the track.

She snorts. “No ‘are you okay? Not even a ‘We missed you’. Just a ‘where is the whiny Viro who left you in a great big hole?’ I’m fine. Thanks for asking!”

“Seriously,” Gum says. “I know you’re all right. Let’s find Midge. Then you can shout.”

Mul lets out a big breath. “After riding that Ibis, Midge wouldn’t cross open space. We were going the long way round. As soon as we saw the ants, he bolted. You know what he’s like with Fire Ants. He screamed like a baby Viro and climbed to the top of the stump. Except he fell in, didn’t he?”

“I tried to pull him out, but he pulled me in instead. Then he stood on my shoulders to climb out and fell off the other side. There were more ants apparently. It was the last I heard of him. But it sounded like he headed that way.” Mul points at the Eucalyptus Grove beyond the track marked for rolling Ferris wheels. “Did you know you could go through the stump? There’s an outside church on the other side, a bush chapel. It’s in another park, JC Slaughter Falls.”

“Hey, we could visit the other park?” Gum says.

And you ask, “Shouldn’t we focus on finding Midge first?”

“Before we do anything, let’s grab some solid bark.” Mul picks up two pieces. “If I’d had these, I wouldn’t have got stuck in the stump.”

That sounds like a plan. Find a couple of pieces big enough to use as a Viro step and add those to the gum leaves and Ibis sticks you’ve gathered already. Mul and Gum grab a couple of pieces each and make for the Grove. Watch out for those rolling Ferris wheels.

2/3 minute walk 300m. The final stop is at the children’s play area surrounded by Gum trees just beyond the bicycle tracks it is a a direct line from the square green sign.