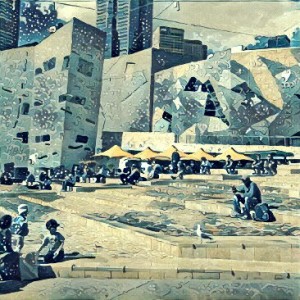 You stand near the map at Federation Square right in front of the Melbourne Visitor Centre. You can hear the flags fluttering behind you. You want to clamber up the many steps to the buildings with a façade of oddly shaped triangles, but it is impossible to get there – the square is teeming with people who are rushing out from the buildings.

You are here because at 5:30 this morning you received a video message on your phone. Your eyes almost popped out in disbelief when you started watching it: it was you, talking frantically, looking directly into the camera with fearful eyes, gesturing as if all hell had broken loose. “I am your future self,” you said. “Melbourne is in grave danger. The Lord of Chaos has imprisoned the five noble spirits of the city. If they are not freed within the next hour, Melbourne will collapse… into chaos! Go to Federation Square and find the three sages. They can free the spirits, but they will need your help to defeat him. This is what you need to do…”

That’s when the message got weird and you started saying things that could not possibly happen; your future self seemed delusional.

“Look, the buildings!” someone shouts. “Run!” The multi-storeyed buildings are swaying wildly, as if struck by an earthquake, but the ground isn’t moving. A fierce gust of wind billows through and almost uproots you. You throw yourself on the ground so you don’t fly away, but the wind is so violent it drags you along the sandstone paving for a couple of metres, until you manage to grab onto a flagpole. Others nearby are not so lucky – they are swept up and over Flinders Street Station, their piercing screams trailing through the air.

Clinging to the flagpole, you shut your eyes and start praying that this is not the day you die.

“Greetings. We are wise, immortal sages from times gone by and times to come by. We travel centuries,” says a deep voice calmly, as if there’s no hullabaloo around.

You look up to see three men smiling and nodding at you, like you’re their long-lost friend. One is wearing a white robe, streaked with dirt, and his flowy beard is entangled with twigs and dried leaves. The second is dressed in a flashy orange flowery shirt and magenta pants and looks like he’s crawled straight out of a time portal from the sixties. The third looks like a businessman, dressed in a navy suit, blue-and-white checked shirt and a red silk tie, which, bizarrely, is completely still – despite the wind.

“No time for questions. I am Akbar, and this is Anthony and Amar,” he says, first pointing to the suit and then to magenta pants. You realise that the men have disturbingly similar physical features – sharp noses, protruding ears, deep forehead wrinkles, and mesmerising amber eyes. They seem at once ancient and ageless.

“The city is losing its order, goodwill, compassion, health and sanity – as you can see,” says Amar with a theatrical sweep of his arm. In his flower-power shirt, he reminds you of a clown. This must be a joke, you think.

“Melbourne’s noble spirits are trapped,” continues Akbar. “Only a human of pure heart can unlock the locks that hold them. Then can we free them with our chants. The spirits have chosen you to help us.” Now you are really confused. Pure heart? And why can you hear them perfectly well, despite this whipping wind.

Anthony cups his hand to his ear. “I can hear the Spirit of Harmony. It says it’s trapped in an elephant. There are other animals close by.” He looks at you; you feel ridiculous, lying on the ground, fingers going numb from gripping the flagpole so hard. “Are there any sculptures around here – any artwork, frescoes, paintings?”

You remember that there are sculptures near the Artplay centre.

“Yes, I know there’s a trail of animal sculptures,” you say. “Right near Mali the Elephant! But I can’t stand up in this wind.”

The sages stare at you intently.

You tentatively unclasp your fingers. You feel energy humming through your body as you float up from the ground, levitating, two metres in the air, before being gently pulled down to earth, feet first. The three sages are now grinning at you.

“With us, you are safe,” says Akbar, and before you realise what’s happening, Anthony and Amar are on either side of you, arm-in-arm, and you are dodging the anxious crowd, making your way past the ACMI Café towards Deakin Edge and then taking steps down to the Yarra River along the Princes Walk. You turn left after descending the steps, and on your left is the ArtPlay centre where you spot the first sculpture of the orange mosaic snake. You round the corner of the building to the back where there is a semi-circle of stones with animal carvings. From there you see the trumpeting elephant. 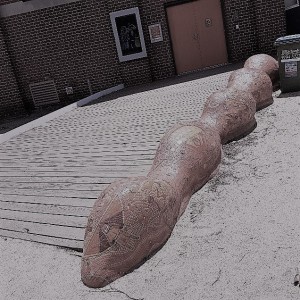 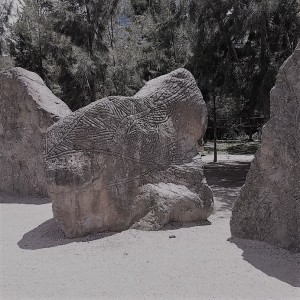 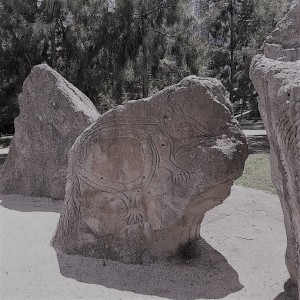