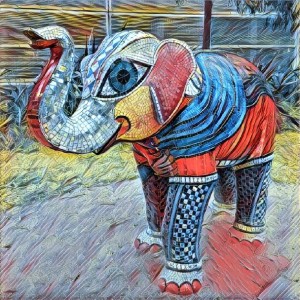 “Not bad for public art,” says Amar, running his hand across the bright mosaic patterns on Mali the Elephant.

Anthony gazes at the slides and swings strewn across the nearby playground, then at the people walking along the riverbank, scratching themselves uncontrollably, as if their skin has been infected by invisible parasites.

“You must have really ticked him off this time,” says Anthony, raising an eyebrow at Amar.

You feel an itch on your left arm, and as soon as you start scratching it, the itch spreads all over your body. “Ticked who off?” you ask the sages. “And why am I so itchy?”

Before they can answer, your ears hear a murmur in the distance, which quickly amplifies into a grating, raucous din. You turn around to see a stampede of people rushing towards you, but as they get closer, you realise they are grunting and barking, mooing and oinking, with saliva dribbling out of their mouths. No one is speaking words. You dive beneath Mali’s belly for safety, but you have a clear view of the sages, who stand their ground, unperturbed by the possibility of death by human hoof.

“The chaos has only just begun and already people have lost the ability to speak. Things will get much, much worse,” says Akbar, resembling a Doom’s Day oracle.

“Our current powers cannot contend with this,” says Anthony. “I think we need our ultimate boon. We can’t save Melbourne otherwise.”

“What do you mean?” Amar snorts. “Become mortal? We’ve saved every other city as immortal men. Why not Melbourne, too?”

The cacophony of bleating and meowing, squawking and croaking, becomes deafening – hundreds of human-animals stream past, scratching as if they’re riddled with fleas, kicking up dust into your face. Somehow, the hoards weave around the sages, as if there’s a force field around them.

“This is your fault, “says Akbar. “You told Chaos that our mother wishes he’d never been born. How did you think he’d react?”

“The Lord of Chaos is our older brother,” Anthony answers. “We were born triplets after him. Chaos never thought our mother paid him enough attention. He turned bitter from the jealousy.” He gives Amar a friendly shove. “And this idiot loves to twist the knife.”

“Enough of the history!” yells Amar, shoving Anthony back. “I’m sick of you two always blaming me. Like you’re both innocent.”

“Quiet the both of you,” says Akbar, placidly. “If we want to have any chance of saving this town within the hour, we need to concentrate our immortal power into a finite lifespan.”

“If you die, you’ll be dead, so you won’t feel or know a thing,” says Anthony, curtly. “Now, let’s do this thing before Melbourne is destroyed.”

Amar shuffles over to his brothers to form a circle in front of Mali, their arms stretched towards the centre, palms folded into fists.

“We call upon our highest powers, our women-forms, our highest selves. We call upon Bano, Belinda, Basanti to inhabit us,” they say, their voices confident, their eyes closed.

You gape, open-mouthed, as the men dissolve, as if they’re holograms, and materialise an instant later as women.

“Hoozah!” says the woman in a navy suit. “I am Belinda, and this is Basanti and Bano,” she says, first pointing to the woman in the bright orange floral skirt and then to the woman in the long white dress. Their faces look eerily similar to Anthony, Amar and Akbar, but their hair is long and raven-black and curly.

“The Spirit of Harmony is screaming at us to save her. It says the human needs to knock on the elephant’s head three times,” says Belinda, looking at you.

You crawl out from beneath Mali’s belly and brush the dirt off your knees.

“What are you waiting for? Us to get trampled by the human-animals? We’re mortal now.” Basanti spits.

With a fist, you knock on Mali’s head three times.

You join them in their rhythmic and musical chants that rise to the skies.

Smoke begins rising from Mali, forming a small cloud above her. Then the hazy form of a woman with wings emerges from the elephant and hovers over the cloud. She has a plain green cloth loosely draped over her body. She reminds you of mythical goddesses of yore; her demeanour is regal and assured.

“I am the Spirit of Harmony,” she says, smiling at you. “Thank you for freeing me.”

With those words, she soars skyward. As she disappears over the horizon, you notice that the elephant has come to life. It’s swinging its trunk, bowing down, and having an inaudible conversation with the sages. You watch them in awe, with your mouth agape.

Suddenly, people around you cease their frenzied scratching and animal shrieks.

“Thank heavens! I can speak now,” a woman says through tears.

“I thought I was going to turn into a demon,” says an old man, relieved.

Bano turns to you and says, “One down, four to go. The Spirit of Tolerance is calling us from that direction.” She is pointing past the train tracks and car park towards Russell Street. “It is trapped inside something that flies. Lions and winged horses are nearby.”

You look up the way to Russell Street on Google Street view and realise that the Forum Theatre is nearby. That’s where you’ve seen lions and winged horses before!

“Follow me,” you say, and you lead them across the children’s play area, climb the stairs right ahead of the playground, and head towards the car park, pushing through the crowd. You follow the signs for NGV and pass through NGV to Flinders Street. As you head right on Flinders Street, you see the Russell Street/Flinders Street intersection and the gothic-Romanesque architecture of the Forum Theatre. As you cross Flinders Street to get a close-up view of the lions and winged horses on the Forum, you notice the eagles, further up Russell Street guarding the entrance to The Grand Hyatt. 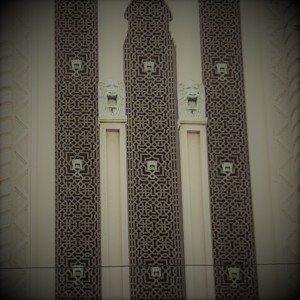 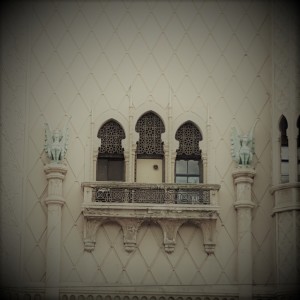