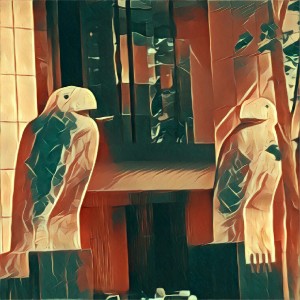 As soon as you reach Grand Hyatt, you come across a mob blocking the entrance and your way to the two guardian eagles. Behind the glass doors, the hotel’s security guards are standing side-by-side forming a wall of muscle and brawn, ready to tackle the mob of 500 or so people if it makes its way in.

“Let us in! We need shelter!” they are yelling.

You look up Russell Street and realise that the mob has literally smashed its way along the street – there are cars with shattered windscreens, trees divested of low-hanging branches and leaves, street-signs bent into strange angles.

“Hey, that guard just stuck his finger up at us. They think they’re better than us!” a woman shouts.

“They’re locking the doors,” a man yells. “How dare they lock us out?”

“Break it open! Break it open!” The chant spreads through the mob. A small group of men pick up a large tree branch lying on the street. “Move!” they yell, and the mob parts to make way for the men, who start ramming the branch against the glass, which cracks instantly. Others scramble to find more branches.

“This mob is his doing,” says Bano. “This is Chaos at work.”

“Our chant won’t work from this far away,” says Basanti, looking at the eagles. “We might as well give up now and become immortal again.”

“Shut up if you know what’s good for you,” Belinda.

You want to weep, seeing your city descend into disorder like this. But there is no time for tears. An idea hits you.

“If we create more chaos, maybe we can get the crowd away from there?” you tell the sages.

“Brilliant,” says Bano. “I’ll get you the loudest Indian drum and then you can create as much noise as you want with it.”

Bano swirls her hands high in the air and a whirlwind of colour and smoke rises. The next thing you know, a semi-spherical drum the colour of vermilion is sitting in front of you. It’s so big it reaches halfway up your chest. “Whoa! This is the largest drum I have ever seen,” you exclaim.

“This is the nagada. A musician could get the sweetest music out of this but for now any noise you make is going to help us,” says Belinda, handing you a pair of drumsticks a metre long and ten centimetres in diameter. “Beat the drum for one minute, then the magic in the drum will make sure the drumsticks will continue to beat without you for a minute more. That should give us enough time to free the spirit.”

It takes a while for you to get the drumsticks to work – it’s awkward reaching up and over the drum – but before long it’s as if the sticks themselves are guiding you, helping you to beat the drum rhythmically, and the booming sound of the nagada begins bouncing off the walls of buildings on the street.

The crowd turns to focus on you. Several of them have put their fingers in their ears to block out the drumming noise. They’re look at you like you’re their prey. You feel your hands getting clammy, making it difficult to grip the drumsticks properly. They begin closing in on you, but as soon as you are sure one minute has passed, you release the sticks – and to your surprise, they continue beating on their own. You crouch down and crawl through the crowd for a few feet, then stand up and look behind you to see people fighting for the drumsticks, but they are being whacked by the sticks as they continue their magical beat.

At the entrance to the hotel, you see Belinda and Bano arguing while Basanti sits at the base of the eagle on the right, sulking with her head in her palms.

“What happened? What’s wrong?” you ask in panic.

“Surprise, surprise – they can’t get the chant to work,” says Basanti, rolling her eyes.

“Quick, jump three times facing each eagle to unlock the locks while I figure out the chant,” Belinda shouts over her shoulder.

“Wait,” says Bano. “I’ve spent the most time with the Spirit of Tolerance. I know exactly which chant will appeal to her.” She closes her eyes. “Dos paraae dekhi kari, chala hasant hasant. Apne yaad na avaai, jinka aadi na ant. There go some people pointing others’ faults, laughing. Their own they forget, which have no beginning, no ending.”

And then, quietly, without any fuss, the hazy form of a young girl-child with wings appears, hovering in front of the eagles. She has a bunch of wild flowers in one hand and long-stemmed crimson roses in the other.

She looks down at you and the sages. “Thank you for freeing me. And now shall tolerance roam free in this city.” She showers flowers over you and flies away.

The guardian eagles start flapping their giant wings. You all have to duck to avoid getting hit in the head by their wings.

A hush falls over the mob. People look at each other in bewilderment as though they’ve just woken from a dream to find themselves in a strange room.

“Now to the Spirit of Love she’s in pain. She’s near two churches facing each other,” says Belinda.

“Is it St Michael’s? It has a red door. Can you ask if she is trapped in the one with red door?” you ask.

“No, she says she is inside the one which has a relief of three men on a stone slab nearby,” says Belinda.

“Oh, that’s Scot’s Church,” you say, standing up because the eagles are completely motionless again.

You lead the sages up Russell Street, cross Collins Street to reach St Michael’s Church, then cross to the opposite side of Russell to reach Scot’s Church. 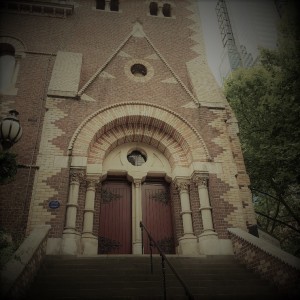 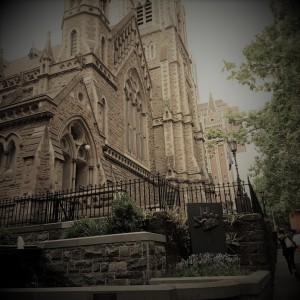