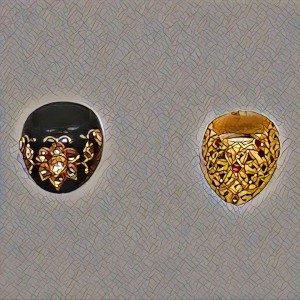 ISKCON! What an odd name for a spiritual organisation. But not as odd as your social media page is going to look with a photo of Crossways Vegetarian and Vegan Restaurant’s signboard on it.

Suddenly, you hear a woman’s lilting voice say, “Good job.” You spin around to see a white woman in a gold sari standing at the bottom of the narrow staircase leading up to the restaurant, watching you with an bemused smile on her face. You find yourself transfixed by the intense green eyes that dominate her elfin face.

She ambles towards you, clasping a blood-red velvet purse, which contrasts sharply against her sari. With a menacing laugh, she says, “Why are you so determined to save that stupid bitch?” She hands over the purse and heads back up the stairs.

The purse feels weightless. You open it and peer inside. It contains two 18th-century gem-studded thumb rings, which were worn by the royal archers in Indian armies. They were decorated in the intricate kundan technique, which used gold foil to set precious gems into hard stone, such as jade or metal. Kundan is still popular in India – but the archers quickly perished before the sophisticated firearms of the British.

You receive the next instructions on your screen:

Go to the intersection of Swanston and Bourke to find the answer to this: