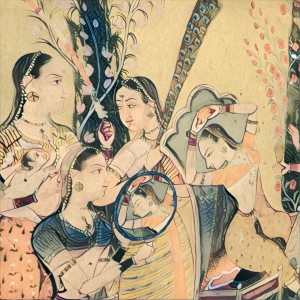 This whole adventure has been laced with history and curious connections between Melbourne and India… isn’t that strange – all of the clues connect you to Saloni. How could the kidnappers have known that Saloni had taken you to Crossways restaurant, or that you had together researched the history of Tipu Hall of Victoria Buildings? Had they forced her to reveal the details? You try not to think of what methods they might have used get her talking. The sooner you get all the artefacts, the better.

You think back to the riddle:

You look around to each corner of the intersection – you cannot see anything that has to do with sea, or courage or faith – only shops, people and more shops. At one corner, you notice an eccentric, life-sized sculpture of the three walking men. You walk over to the men. An inscription says: “Three businessmen who brought their own lunch: Batman, Swanston and Hoddle”. John Batman, Charles Swanston and Robert Hoddle – how funny that these three Australian pioneers have been sculpted as businessmen, ogling the city they helped create.

Swanston came to Australia by sea – he had started his career in India, where he participated in many military expeditions, before taking a year’s leave to Tasmania to recover from ill health. He made his fortune here as a merchant and banker, and never went back.

As you look around again, you notice something else at each intersection: poles – electric poles! You walk over to the pole closest to the sculpture of the three men. Something at its very top catches your eye. It’s an animal! A cockerel!

You look at the other poles – an animal sits on top of each of them. Are they connected to courage? Or faith? Or dancing?

Moving clockwise, you carefully walk to each intersection to inspect the poles more closely. The next pole has a fish upon it, the third one a flying pig and the final one a horse. Electric poles. Electric seas. But what of the animals?

It doesn’t make sense. You wonder what other things connect back to electricity here, other than the poles.

Then, on the intersection with an electric pole with a flying pig on it, something else waist-high catches your eye. You rush over to examine the object once the pedestrian light goes green. You walk around it. Yes, it is all there! Seas, courage, faith, dancing and an unmissable connection to electricity.

You quickly take the photos and upload them to social media. Re-entering the Story City app, you scroll down to the bottom of the page and press the red button…