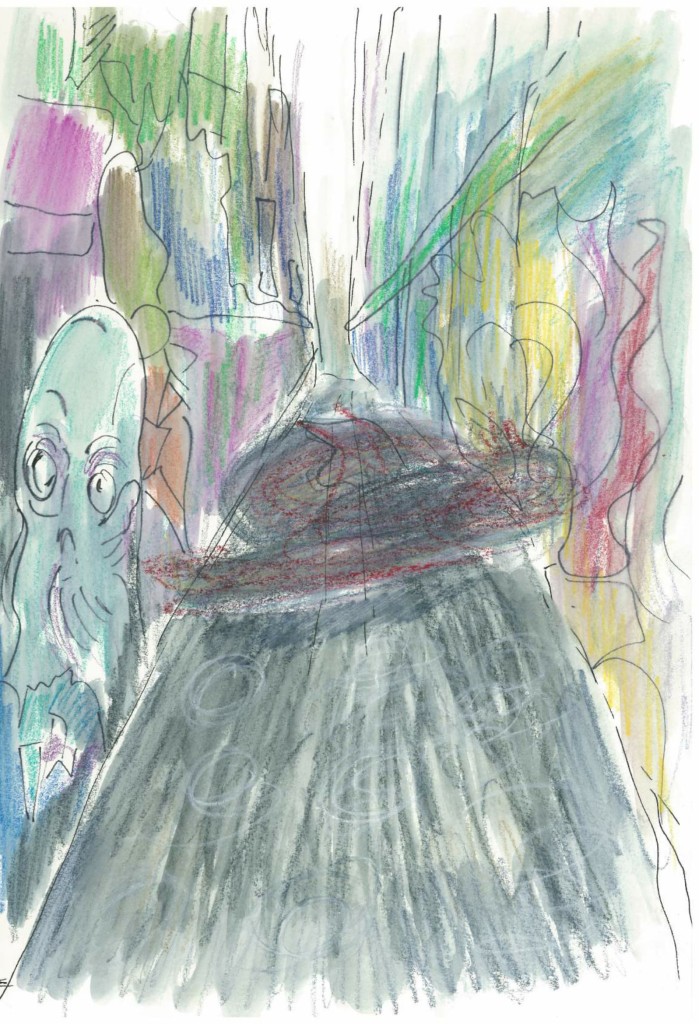 Union Lane doesn’t look like it holds the key to unimaginable power. To your relief, it doesn’t look like Green Mask has found it – he’s pacing up and down the bluestone cobbles, peering at the bright, messy slashes of graffiti. When he hears your footsteps he turns around, bow and arrow at the ready.

“Wait!” You raise your hands and he cowers back. He’s clearly as afraid of you as he is desperate to get his hands on the power. Then he raises the bow and arrow again.

“Wait!” you say again, and then remember the image he was looking at in the Manchester Unity Building. “Didn’t you say you wanted to stop the killing? Don’t you want to help people?”

He stares at you, his lips trembling.

“Don’t you want to be a hero, not a villain?” you say softly, and he sobs suddenly and throws the bow and arrow down. “Why don’t you go home, relax, and let me take over from here? I accept your offer to be my apprentice. I’ll get the power and share it with you. As you said already, I must be very powerful… I mean, I am very powerful.”

“Yes, yes, Great One…” He scrambles up and bows, and you wait for him to leave, but he doesn’t budge; instead he stares at you avidly. “I think you should leave,” you say gently. “Otherwise I might find myself displeased.” It’s almost satisfying to see the fear leap into his eyes. He leaves, still bowing as he goes, which makes you feel a little stupid, but oh well – you’re alone at last! Now, just how are you supposed to access this power?

“Great power, come to me!” you shout, feeling even stupider. But it’s worth it, because some of the graffiti is peeling itself off the wall, wrapping itself into a colourful ball, which sprouts head, arms, legs. A graffiti-spirit! Awesome!

“I am your overlord, oh spirit!” You wave your arms wildly and the spirit’s red eyes glow.

“Who calls themselves the great demon-king Ravana’s overlord?”

Ravana? Demon-king? You don’t understand, and you must look confused, because the spirit grows larger, its graffiti skin brighter, almost crackling with colour. “I am the fearsome, all-powerful king of Lanka, who will destroy Rama and Sita. Anyone who doesn’t bow to me will…”

Oh, he’s a character from the Ramayana, you realise. Maybe you should have watched the rest of the street performance after all, because you have a nasty feeling he might be one of the baddies…

“DIE!” It swoops down on the bow and arrow that Green Mask left. Before you can protest that spirits can’t pick up bows and arrows, it’s picked it up and shot you in the leg.

You collapse theatrically on the ground, moaning. You look down and see your legs disappearing…