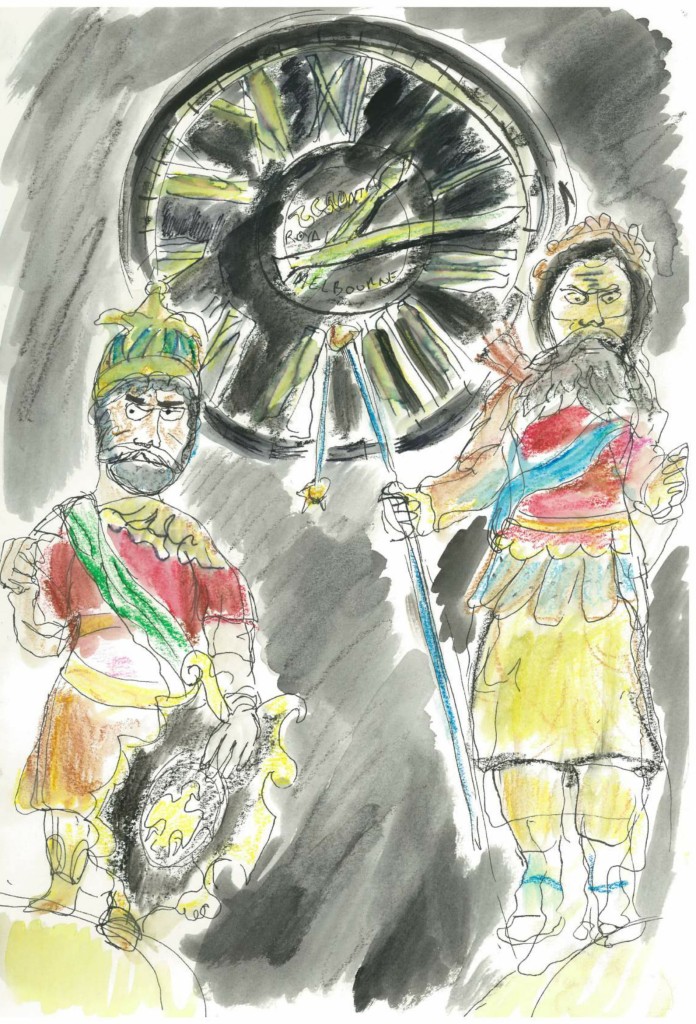 “We’re meeting him under the clock,” Ram explains. The arcade’s 19th-century interior, glass roof, old-fashioned shop windows, the black-and-white floor, are a strange, cosy contrast to the two statues that loom on either side of the clock up ahead. You’ve only been to the arcade a couple of times before, and you never took much of a look at the clock or the statues. As you get closer, it all looks even more bizarre… fierce figures from another world, one clutching a shield, the other a spear.

“That’s Gog and Magog,” Ram informs you. “They’re supposed to guard the underworld, and have dark powers.”

You can see a man standing under the clock, with a familiar, curly dark head. It’s Ram’s brother, Lakshman, in plain clothes. You get closer, and Gog and Magog begin to creep you out.

“There’s a prophecy that says that when Gog and Magog make war again, the war between powers will end,” Ram continues. You wish he would stop lecturing.

“Lakshman!” Ram claps his brother’s shoulder and the man jumps and turns.

“This,” Ram says, “is a PI who wants to know about the Maricha case.”

You put your hand out. “Pleased to meet you.” Lakshman takes it, and you wince. His hand is terribly hot.

“I’m afraid we can’t release any information to the public,” he says pleasantly. “You see, it’s a more complex matter than people realise. Maricha the Magician was part of a secret occult organisation called The Golden Deer.”

Disappointment weighs down in your stomach. “There’s nothing you can tell me, nothing at all?”

“Fun fact about these statues,” Lakshman says and you want to groan. Why are they so obsessed with these? “There’s also a story about them in almost every major religion. They’re supposed to help evil win the war against good. When the time comes.”

Ram laughs, and it has an edge to it that makes you step back. “And, my good friend, your time is now. You see, Maricha didn’t want to help prepare for the war against good. He wanted to tell the police. How fortunate that Lakshman is a policeman, as well as a member like I am.”

“Of The Golden Deer, of course.” They say with wide smiles. There’s a cracking sound, and you see the statue on the right, Magog, lift its spear, which burns with gold light. It aims and throws, and a burning pain spreads across your chest.

The last thing you hear is the clock striking.

Your time is up.